When the Butanding Interaction Officer tells you to jump off the boat, you jump.

P and I went to Donsol a few days ago to swim with the whale sharks. The butanding, as it is known locally, have put the sleepy town of Sorsogon  (about 500 km south of Manila) in the tourism map back in 1998 when a group of divers came into contact with these gentle giants that make their way to the plankton-rich waters off Donsol to feed from November to May. 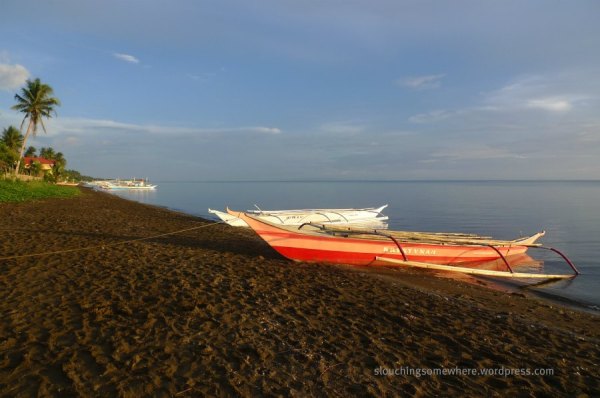 With the push of environmental and conservation groups, the municipal government of Donsol passed into law the protection of the whale sharks (which used to be hunted and poached), turning the small town into a top ecotourism destination and the butanding as the main attraction. But so as not to impede the whale sharks in their natural habitat the local tourism office and World Wildlife Fund established very detailed whale shark interaction guidelines: you cannot touch the whale sharks; you cannot feed them; you have to keep a safe distance of 3 to 4 meters; there can only be six swimmers (or one boat) per shark, etc. Unfortunately, not all those rules get followed once there in the water.

Mid-February to mid-May is considered the best time to visit Donsol. March to May is the peak season and it’s also summer vacation time in the Philippines. We went to Donsol during Holy Week, probably the peak of peak season. (Relatives living in neighboring Albay inform me later on that February is the best time to go, less tourists and more chances of seeing the whale sharks.)

When we got to the Donsol Tourist Center at 7 am the day before Maundy Thursday (and the start of the long weekend), there was already a big crowd and no discernible line. I was suddenly relieved that we made reservations the day before as some people trying to get in the boats for the two trips that morning were already being told that they would have to take the afternoon trip (whale sharks typically feed during the morning) or the boats for the following day. Word of advice if you’re going during peak season, try to register at the tourist center the day before you want to go on your trip. (I heard from a tour driver that by Good Friday and Black Saturday, there was such an overflow of tourists, that they were already being told they would have to wait a few more days to get a slot in one of the boats. Some had to leave without even getting on a boat.)

How to swim with the whale sharks in Donsol: Register at the Donsol Tourist Center, pay P100 as registration fee and P3,500 for the boat (for 6 people), watch the video, get assigned your boat and BIO, get on the boat, listen to your BIO’s instructions, and go out to sea

During the peak season, two to three trips are made with a maximum of 30 outrigger boats in each trip going out to sea; each trip lasts for three hours. Since you’re out in the ocean and the whale sharks are not exactly trained to emerge whenever tourists come, there’s always a chance you won’t get to see them on that three-hour boat ride. Which was what we thought would happen to us.