What’s better than having ramen? Slurping ramen during a rainy day.

Manila and many parts of the country have been inundated by rain since last month and aside from slurping local favorites such as sinigang, batchoy, mami, champorado and arroz caldo, the Japanese noodle dish is gaining more following in the country.

While a few years back, Japanese restaurants serving good authentic ramen in Manila were not abundant, nowadays you could find one in most parts of the metro. Take Ramen Yushoken in Alabang.

Ramen Yushoken probably tops the list of ramen-ya these days. I know it tops my list. Before it opened, we were already hearing some buzz about it as restaurateur Elbert Cuenca had traveled to Tokyo to go and try bowls and bowls of ramen (lucky!). Months later he opened a ramen-ya serving ramen derived from Japan’s “Ramen God” Kazuo Yamagishi, inventor of the tsukemen (dipping noodles), proprietor of the legendary Taishoken ramen shop in Ikebukuro, and adorable-looking old man who regularly sits outside his restaurant. His successor (or “son of ramen god”) came to the country to make sure that the different varieties of ramen to be served in Yushoken are at par with ramen god’s champion ramen houses. What a build up, right?

Since a queue often forms outside the resto during lunch and dinner hours, we were there even before it opened at 11 am. Yushoken serves ramen in a rich, thick tonkotsu broth base (made from boiling pork bones over several hours). Being a fan of miso (soy bean paste), I stick to my favorite even if it’s described as the most rich soup in the menu; the hubby got shoyu.

Ready for my ramen

Understandably, expectations were high. It opened December last year and it didn’t disappoint as fellow ramen-loving friends kept singing it praises. Because it entailed a bit of a drive from where we lived, P and I only got around to trying it, five months after it opened. And it was worth the long drive, the gas and the toll fee that Saturday morning. END_OF_DOCUMENT_TOKEN_TO_BE_REPLACED 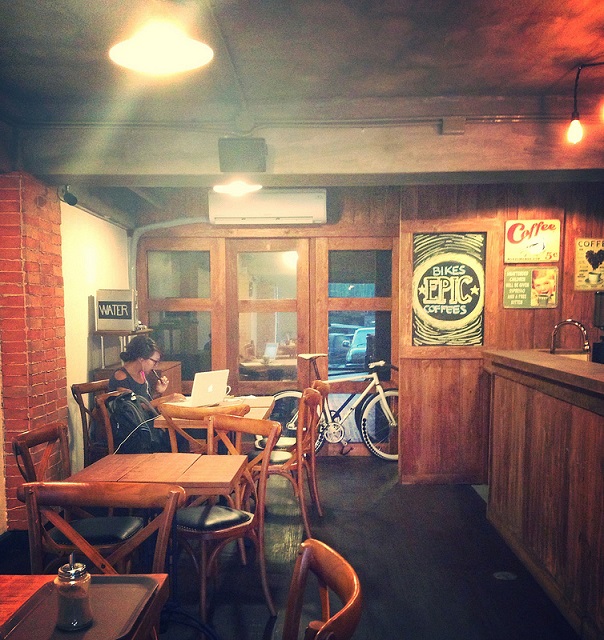 Even after a long day at work, one of the things I find comforting is when I get to cook. It’s an escape from a blinking (and demanding) computer screen and into the warm welcome of a kitchen counter, chopping board and pots and pans. But living near the Kapitolyo area (it’s been a year!) provides another source of comfort–exploring its bustling dining scene.

The neighborhood of Kapitolyo in Pasig has been abuzz of all things food for some years now when restaurants, cafes and other eating joints started sprouting in every corner of the residential area (especially along East Capitol Drive). I’ve always wanted to list down some of my favorites, so here goes. If ever you’re in the neighborhood of Kapitolyo and you’re wondering where to eat, here’s my quick guide (just prepare for the not-so-quick search for parking):

END_OF_DOCUMENT_TOKEN_TO_BE_REPLACED

First off, don’t watch The Kimchi Chronicles because you’ll be tempted to book a ticket to South Korea. The next best thing is to find a good Korean restaurant to satisfy that craving and even if you’re in Manila, you’re bound to find one.

END_OF_DOCUMENT_TOKEN_TO_BE_REPLACED

When you’re traveling and you encounter a menu where you can’t understand single thing, do you a) make an attempt to communicate with the server with only four words you know of the local language , b) point at something in the menu and hope you don’t order something heinous, or c) try your luck in another restaurant with English translations in the menu? I’ve done all three: a) if I am feeling adventurous and , b) if I’m feeling extremely adventurous and c) when exhaustion dictates the need for something familiar and the the only adventure I want to have that day is figuring out the train route.

In the trip to Hong Kong, a place where good food is abundant, I found myself making all three decisions. In the mornings, when P and I are eager to start our day and before we meet with our friends, we wake up early and explore the nearby streets on our own from where we were staying.

END_OF_DOCUMENT_TOKEN_TO_BE_REPLACED

A bright sunny Saturday (a break from all the rain!) and curiosity for a vegetarian ramen place brought me to the Collective.

What used to be a warehouse along Malugay Street in the business district of Makati and transformed a couple of years ago is now a low-rent space where it seems many of the young and creatively-inclined set in the area have opened several shops and restaurants.

Being a resident of Quezon City (which isn’t exactly close to Makati especially when you consider traffic-congested EDSA in between), I hardly venture to Makati unless it’s for work or it’s a place easily accessible by the MRT (hello, Buendia and Ayala Stations!). When I heard of the Collective years ago from some friends, I’ve always been curious to see the place. How was it similar and/or different from Quezon City’s Cubao X?

For fellow not-too-hip folks who are also late to the party, don’t expect the Collective to be anything like the usual shiny malls of Makati. It used to be an industrial space and remnants of that are still visible–at least what’s not covered in striking, colorful graffiti, some curious boutiques, or interesting restaurants.

Aside from the hip and artsy stores, what it has in common with Cubao X when the QC haunt came alive almost a decade ago (has it been that long?) is that you could tell it’s the kind of place that also comes alive in the evening. So when we get there at lunch time, everything is quiet. Save for a fashion shoot happening. Most of the activity are found within the restaurants by the entrance of the compound. And an hour later a crew would start setting up in the middle of the space for an after-party of an indie movie in the evening. I imagine the place would be substantially less quiet and more crowded by then. 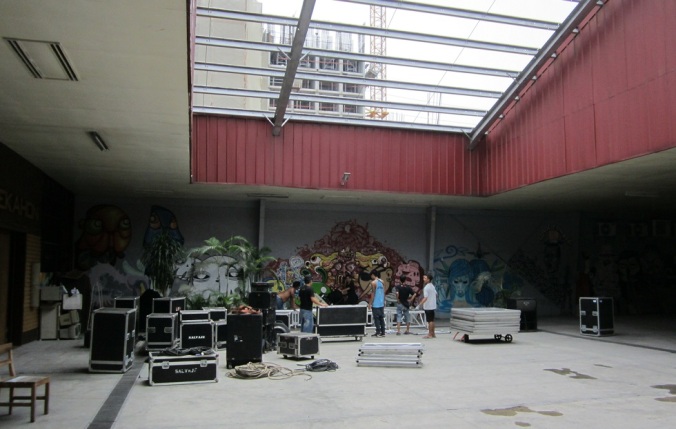 The Collective gets ready for a party in the evening