So there we were with our one large luggage, between platforms 4 and 5, wondering whether we should jump in the train at platform 5 when the JR person informed us a few minutes earlier that the Kansai Rapid Service was going to be in platform 4. My husband pointed out that the train had  Rapid Service blinking across it. Being it our first time to land in KIX and to ride the Kansai Rapid Service, we were not sure if it was the one going straight to JR Osaka Station in Kita-ku or if there were other types of rapid services. It was on a different platform. What if it was the right train? The next train would be another thirty minutes and it was already getting late. We jumped inside with only a few seconds to spare before the door closed.

As we pulled out of the airport station, I was still not sure if it was the right train until the monitor showed station names that I could see in the Osaka Railway and Subway map I got from one of the airport information counters. I could now stop gripping my husband’s hand. 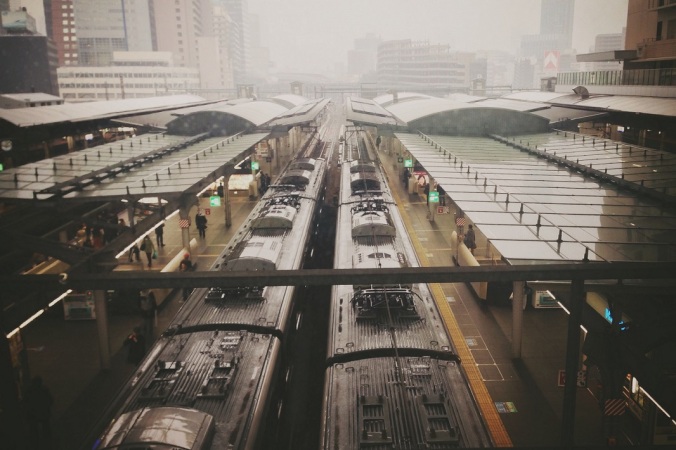 If you’re heading to Osaka, Kyoto, Nara, Kobe and other parts of the Kansai region from outside Japan, then you’ll most likely be flying into the Kansai International Airport (KIX). From KIX, you have several ways to get to your destination.

END_OF_DOCUMENT_TOKEN_TO_BE_REPLACED

“I have seldom heard a train go by and not wished I was on it.”—Paul Theroux

Around four months ago, while killing time inside a bookstore, I saw this book and much as I’m embarrassed to admit, finally made my acquaintance with Paul Theroux.

The title was the one that lured me in. And the back cover copy finished me off: “Here Theroux recounts his early adventures on an unusual grand continental tour. Asia’s fabled trains—the Orient Express, the Khyber Pass Local, the Frontier Mail, the Golden Arrow to Kuala Lumpur, the Mandalay Express, the Trans-Siberian Express—are the stars of a journey that takes him on a loop eastbound from London’s Victoria Station to Tokyo Central…” A railway adventure if there ever was one.

END_OF_DOCUMENT_TOKEN_TO_BE_REPLACED

One of the UP monorail coaches atop a test track (and somebody here just got …into filters, hehe)

I have written about my fascination for trains and rail travel in this blog–from finding one’s way in an elaborate railway system during a vacation to surviving the morning rush hour here at home. While I have yet to experience extensive rail travel, and can only dream to see what this ‘architectural historian with a penchant for railroad stations‘ has seen, my infatuation for the railway system remains. Besides the romance that surrounds train travel, it has to be one of the most efficient forms of mass transit–hauling off commuters by the cars and escaping the horrible traffic on the roads.

More than a month ago, the Philippine Railways page in Facebook (oh, why did it take so long for me to know you had a page?!) revealed that new monorail coaches had arrived in the University of the Philippines in Diliman, Quezon City. According to the report, the state university and the Department of Science and Technology developed it–it being dubbed the Automated Guideway Transit System.