“Magtanim hindi biro, maghapon nakayuko, ‘di naman makatayo, ‘di naman makaupo…” So goes the classic Philippine folk song, which sings (in a very upbeat manner I might add) about  how farm work is no joke, how you’re bent over the entire day while you plant, and that you can’t sit down or straighten up to stand. And as a bunch of us city folks whose day jobs likely include a lot of sitting around joined a group of organic farmers to plant rice in Capas, Tarlac, that song was constantly referred to and hummed.

So how did I end up, in the middle of a rice field, ankle deep in mud, holding a bunch of rice seedlings, bent over and with the song playing in my head? 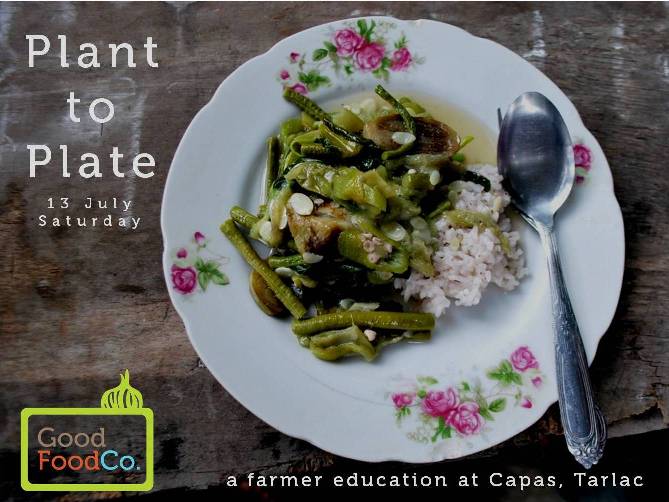 This was the invite. My vegetarian sister who writes about “meals for the meatless in Manila” in her well-written blog, Schlepping in the City (she says, she schleps, I slouch) gets her bag of organic veggies from the Good Food Community, which supports a cooperative of farmers from a rural town in a province known for its rice farming.

END_OF_DOCUMENT_TOKEN_TO_BE_REPLACED

Last night, the husband and I went to 10A Alabama in Quezon City for Foodstock, a fundraising event from the good people of Good Food Community. There were musical performances , a (mostly) vegetarian spread, lovely homemade ginger beer, and a great reason to spend P250 (around 20 USD) as all proceeds were going straight to helping out the small organic farmers cooperative in Capas, Tarlac, for their greenhouse and irrigation needs in the next few months.

I first learned about Good Food Community from my sister who gets her bayong (basket) of organic veggies from the small farmers that the group supports within their Community-shared Agriculture program. Basically, you pledge to buy local vegetables for the week (for several weeks) from the farmers, who in turn are assured of a stable demand for an entire season. (Learn more about it here.) The group also regularly visits the farms, and shareholders (like my sister) get to meet the farmers who grow these veggies and sometimes help with the harvesting. 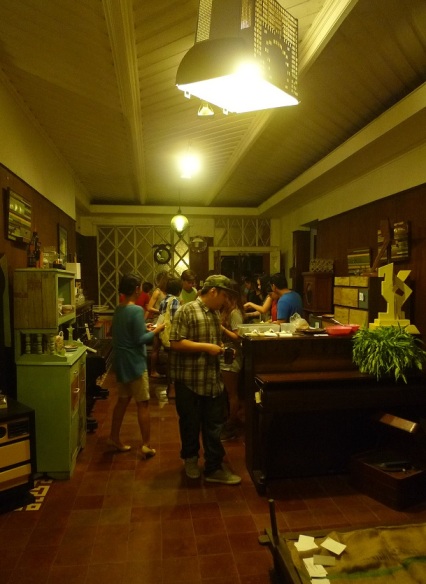 10A Alabama, which houses Resurrection Furniture and Found Objects Gallery, became the venue for Good Food Community’s Foodstock (Getting distracted by the pendant lamp, hee)

Meet Char, one of the folks behind Good Food Community. One of the coolest persons I’ve ever met (She also makes good ginger beer!)

Last night, the farmers were there. They along with GFC volunteers cooked a wide spread of vegetarian dishes–from a vegetable and tofu curry to tortang talong, a kind of sticky rice cake (somebody was not taking notes) and caramelized onion spread with crostinis, and bowls and plates of other vegetable dishes that were as varied as the music.

END_OF_DOCUMENT_TOKEN_TO_BE_REPLACED

Last week, the Maginhawa story I did for the Style Weekend magazine of Philippine daily Manila Bulletin came out. Maginhawa is a long stretch of road in a suburban part of Quezon City in Metro Manila that has, for the past few years, seen a surge of restaurants–from hole-in-the-wall eateries to dining spots with a bohemian flair. Included in the roundup was Pino Resto Bar, Cocina Juan, Van Gogh is Bipolar, and Green Daisy. All four I think showcase what the street and the area (in close proximity to the country’s top university) are all about–diversity, creativity and with a take-it-easy and come-as-you-are attitude.

Pino has long been a favorite and it’s known for its Filipino comfort food with a playful mix of textures and flavors courtesy of chef Ed Bugia. Cocina Juan has also been one of the early restaurants along the street that has evolved from serving Tex-Mex dishes to including a more Latin and Central American-inspired fare after the owner’s memorable trip to Nicaragua (love the chimichurri sauce). And then there is Van Gogh is Bipolar and Green Daisy. Two unique dining spots that advocate more than just good food. (The italicized text below is an excerpt from the submitted article)

Opened back in 2009, Van Gogh is Bipolar is a restaurant that claims to serve a mood-altering menu from visual artist and owner Jetro Rafael. Clinically diagnosed as bipolar, Jetro originally used the space to express both his passions and his therapy–art and cooking. When he decided to open the space to the public, he admits it was also his way “to educate people on the existence of mental illnesses—gusto ko na ma-free yung mga kagaya ko na hindi ka dapat mahiya kung sino ka (I want people like me to be liberated, that they don’t have to be ashamed of who they are).” And for him, food is not just there to nourish, but a way to celebrate life. 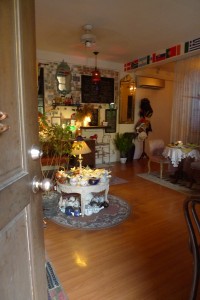 Another dining area in Van Gogh

I found it particularly admirable how passionate Jetro is to share this once private space of his: “I knew very well that somehow a part of Van Gogh is Bipolar is for other people. I want to make it clear that yes this is my sanctuary and yet it is also home for people like me… It goes deeper than the restaurant category. It is a home where you can be yourself and not be judged, here we celebrate our imperfections and embrace our flaws and weaknesses.” From time to time, he also conducts mental health talks. “I invite psychiatrists, guidance counselors, as well as people who are undergoing depression, people looking for someone to connect to or to listen to them, so it’s a home for everybody.” When people ask him if he’s cured, “I say, I don’t know but I know very well that I love and accept who I am. My food is one way of loving and showing my gratitude in this life—na yes I’m bipolar, but I’m a very proud wacko!”

A travel photographer by trade, Jetro found cooking to be a good therapy and began sharing his “Bipolar diet” as he calls it.  He researched on mood-altering food and came up with a three-course (P555 per head) and five-course (P777 per head) menu, which includes salmon, cabbage, nuts, honey, tea and a lot of other food and drinks that are said to activate the happy or calming hormones in the brain (dopamine and serotonin, for example). Hence, the “happy-chill diet” tag. His mood-altering dishes are even cleverly named after famous bipolars (yes, Van Gogh was one).

The restaurant possesses a bohemian and artsy vibe. The interiors, just like the menu, can relax or stimulate (depending on where you sit), with engaging artwork, interesting scribbles and notes tacked on the walls, the remains of a dark room with Jetro’s photos, antique furniture, lovely lamps and teapots, and dim lighting all wonderfully filling the room. The restaurant can only accommodate 12 diners inside, which gives it a very intimate atmosphere. Don’t be surprised if local celebrities or travelers become your temporary servers for the evening, as they have been known to volunteer (the celebs) or work part-time for a free three-course meal (the backpackers).

Another restaurant worth experiencing is Green Daisy, which serves whole, organic foods.

Because 0rganic farmer Daisy Langenegger wanted to keep the link between natural farming and the public alive and healthy, she opened what she calls her “advocacy restaurant” Green Daisy several years ago. For her, diners in the city are often so far removed from the farm that they no longer know what goes into the production of the food they eat—the chemicals sprayed on the fruits and vegetables or the hormones and antibiotics injected into the meat. Being a farmer, she wants to advocate healthy, quality lives through healthy, organically-grown food—serving it to diners in tasty and familiar dishes that are far from the stereotype of bland, health food. And where they serve it—in the garden of her 1950s home—makes it all the more pleasing and welcoming.

One of the dining areas of Green Daisy

Born into a family of farmers and married to a Swiss with an organic farm in Switzerland, Daisy is a third generation farmer. As such, she still spends a couple of days every week in her farm in Isabela (10 hours away north of Manila). When she opened Green Daisy, it was solely a by-reservation-only type of restaurant so she could know ahead of schedule when she was needed in the kitchen and what menu was going to be served. Last December though, she started Oysters and Wine Fridays, where there is a regular seafood menu and walk-in diners are welcome.

What I loved most about dining in Green Daisy was getting a chance to talk to Daisy. Yes, she’s passionate about organic farming and providing  healthy food for consumers. But she also believes in caring for the producers of the food, by compensating the farmers who work for her justly (which is something often overlooked in the Philippines, where the farmers are often some of the poorest) and even supporting their children to go to school, until university. She also advocates growing your own food even if you start with just small pots. “The only guarantee that you are eating chemical-free food is to grow your own food and we also teach you to do that, and to know your farmer. How he farms. That’s what we encourage.”

Dining in Green Daisy feels just like being invited for dinner to a friend’s house (there’s not even a restaurant sign outside), where Daisy plays host and cook as she serves a healthy dose of food that she herself grew or raised. (Well, maybe except for the oysters, which are locally sourced, and the wine.) The atmosphere is conducive to slowing down, taking your time, and enjoying your meal that Daisy herself also enjoyed preparing.