My mom is cleaning her room, which has cabinets and boxes of things, most of which she’s forgotten about. She found a drawer of some of my dad’s old things, which she thought she’s donated all to charity since he passed away.

There’s the cervical collar my mom bought to help him keep his head up. He hated it. My brother used to put it around my dad’s neck and they would fight. He still had a lot of fight in him. He also hated oatmeal. Whenever we’d feed him, he’d spit it out back into the bowl like a child.

He liked peanut butter sandwiches with milk for breakfast and merienda. Rice and sinigang na bangus with lots of vegetables for lunch and dinner. That was mostly what he ate the three years he was bedridden after his stroke. Every time he ate them it was like he was having them for the first time. He would beam at us. He was always grateful. He never complained. Except for the oatmeal.

This post was from my Tumblr blog back in January 2009, two and a half years after my dad died. It’s going to be seven years since he passed away on July 31.

Last Monday, I heard that a girl from college passed away. She was 36. We used to just smile at each other in the hallway, but we didn’t really know each other. She was pretty, unassuming and quiet and, according to friends who knew her, had a really good heart. She got cancer last year and it had spread to her bones. I remember my mom telling me about a family friend who died of bone cancer before, how she was in so much pain. And I think about that girl in college with the pretty smile; I hope her last days were not spent in unbearable pain.

That kind of Monday makes me think of my dad.

He died on a Monday. While everyone was busy, while all his children were out at work, he was sitting on his bed waiting for my mom to bring him to hospital (he was in and out of hospitals the previous three years) when he quietly passed away.

I was in the middle of a deadline in the office. My cell phone’s battery was dying so calls kept getting cut off. A text message from my aunt who told me to go to the hospital because my dad was rushed there made me get up, save my files, shut down my computer, and leave word with my boss and the rest of the magazine staff on what still needed to be edited and laid out. I kept calm and thought (hoped) it was going to be just one of those hospital visits. He’ll be back home in a few days. There was nothing to worry about. But a little part of me knew it was going to be different. Surprisingly I immediately got a cab. Cabs in the Philippines usually have names and the old, clunky cab that stopped in front of me had “In God’s Loving Arms” as its name. That kind of detail never leaves you. I didn’t know whether to cry at this “sign” or laugh at somebody’s odd sense of humor.

On the day of my dad’s funeral, the one thing that I remembered clearly when we brought his body from the funeral home to the crematorium were all the people on the street–getting on a jeepney, walking up the MRT steps, on their cars driving somewhere, anywhere, going about their lives. All the while, you had this grief inside you, it feels very personal, but it also seems so much bigger than you. You wonder how life can go on. Not so much that it would stop because somebody important to you died (although there’s a moment when a part of you wonders about that too), but that he could no longer be a part of it. Any of it. He’s in a box. He’s not going anywhere. He’s in a better place. He’s not here.

Last Monday, I also heard that two good friends just got  engaged. Happy news. I introduced them and set them up on a disaster of a date almost a decade ago. Years later they saw each other again and disaster date was long forgotten. He proposed in Kensington Gardens. She said it was all silly. I can’t wait to see them. Give her a great big hug. Tell them how lucky they both are.

That kind of Monday also makes me feel grateful to the people I still have in my life. To engagements, to my husband calling in the middle of the day just because, to my family, to friends. Yes, it was one of those Mondays.

In the three years that my dad spent in bed, partly paralyzed from a stroke, we got into the practice of talking and praying together before he went to sleep at night. My mom took care of him most of the day while my brother and I, who both lived in the house, worked.

When I would get home from work, sometimes quite late, often my dad would still be up. Like a child waiting for his bedtime reading. To talk and to read to him his evening prayer. “Usap tayo. (Let’s talk)” He would say in almost a sing-song, all smiles. Or “Dasal na tayo? (Let’s pray?)” He would ask earnestly. While he always knew how to make us laugh when we were growing up, he was never one to show affection or ask for it. That changed after the stroke. He became sweet and affectionate, sensitive and prone to tears. He depended on my mom and on us even for the simplest things–eating, standing up, going to the bathroom. I wish I could say I happily obliged all the time he asked that I sit beside him to chat or pray. There were nights when upon coming home I would go straight to my room, mumbling to my mom how I needed to sleep or to finish some work.

Growing up, I think like most other kids, I was not aware, or just not concerned about the mortality of my parents. They were always there to pick me up from school, make dinner, help me with my homework. Sometimes to make myself cry (I was a child prone to the dramatic), I used to imagine what it would be like if one of them were gone. I would feel bad for myself and the tears would come. It was and it felt like an act. I was in high school when I remember staring at my dad who was reading his newspaper out in the garden and only then did I realize that he was, it seemed all of a sudden, ‘older.’ He wasn’t always going to be there. That became more real when he suffered a stroke more than a decade later. And that thought (when I wasn’t pushing it out of my mind) always made me sit beside him, for our evening prayer and conversation.

END_OF_DOCUMENT_TOKEN_TO_BE_REPLACED 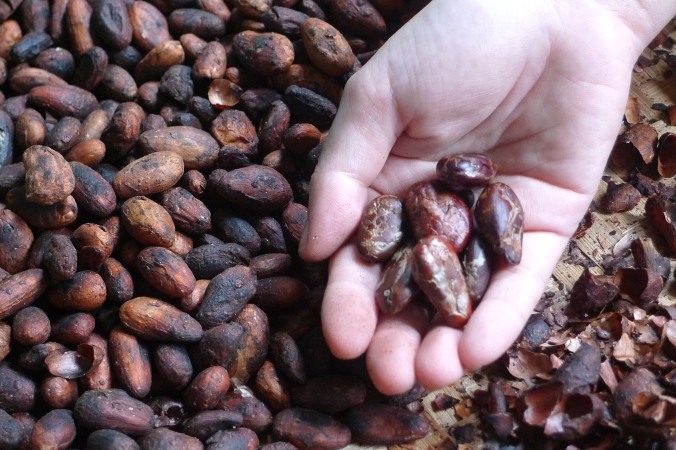 For our New Year’s Eve celebration, my family and I got to do something very special in our book–we got to make and drink hot chocolate the way my late dad used to make it. Preparing it from scratch was a holiday tradition we used to do when my dad was still alive.

I wrote about it to a few friends a few months ago: How every December, my dad would buy raw cacao beans in the wet markets of Divisoria or Binondo, cook them at home, put them in a bilao to cool them a bit, then we would all start peeling them. Our fingers getting all dark after. How my siblings and I actually looked forward to this ‘chore’ every time, because we knew what followed would be my dad bringing the shelled beans back to the wet market for grinding and he would come back with a large container of dark, bitter gooey chocolate, which we would happily roll on a bit of sugar and have it for afternoon snack. This also meant that for that Christmas he would be making each one of us mugs of hot chocolate. How much I missed peeling those cacao beans. How much I missed my dad.

When he was paralyzed by a stroke three years before he died, making that hot chocolate drink from scratch was pushed aside along with everything else. The life we knew then changed.

It all starts with cacao beans. These ones are bought from Santo Cristo in Divisoria, Manila

A few days before New Year’s Eve, while I was telling my mom what my sister and I were planning to cook, my brother asked why we didn’t have hot chocolate last Christmas–even just the local tablea (blocks/balls of cocoa powder) that we had started buying in recent years. I told my mom I would look for some a day before my sister gets home. But the morning of the 30th, mom surprised us by heading off to Divisoria early in the morning and coming home with a bag full of raw cacao beans. We were going to make some old-fashion tsokolate eh! Just the way dad used to make it for us.

END_OF_DOCUMENT_TOKEN_TO_BE_REPLACED

Today is my dad’s birthday. He passed away four years, three months and twenty-two days ago and though the bed where he stayed for almost three years when he was sick has been disassembled, gathering dust in one of the rooms in the house; though almost all his clothes have been folded, packed and donated; though his drawers have all been emptied, there are still traces of him in the house.