Sometimes you get a moment when you’re traveling when you think–this is it. This is why I got on a plane, a bus, a boat and went somewhere unfamiliar. This is why you travel. You’re a stranger in a new place, but that place feels familiar. Everything is new to you, but it also feels like a page from your childhood. You get a connection from the place. It’s almost like magic.

When my sister and I went on our Bangkok trip last June, we both knew we wanted to see a muay Thai match. It wasn’t because we were big fans of kick boxing. We liked boxing in general. We grew up watching my dad watch boxing. Sugar Ray Leonard, Evander Holyfield, Mike Tyson, Oscar De La Hoya type of boxing . They were the names we got to know on Sundays whenever there was a big boxing match in Las Vegas. You couldn’t talk to my dad during those Sundays. He would be parked in front of the television, his eyes never leaving the screen. He watched intently, though never quietly.  He would shout, groan, whoop, and curse at the TV. All the while, my siblings and I would sit beside him, watching the match and watching him. Enamored of both.

When we booked our tickets to Thailand, I knew I wanted to watch a muay Thai match. Seeing a kick boxing match live was going to be be a different way of experiencing a part of Thailand’s culture and it was my chance to watching a boxing match ringside. Kick boxing but still boxing, I thought. Of course, we didn’t know ringside seats for tourists would cost 2,000 Baht (65USD), an amount, which after spending a couple of days in the budget paradise of Bangkok, was relatively pricey.

But all thoughts of “I can spend that in shopping” vanished the minute one of the ticket ladies of Ratchadamnoen Stadium opened the door and led us down to boxing ring “just to take a look.” My sister was right. We were goners the minute we saw it. That ring, harshly lit and all, that stadium, which has obviously seen better days, was one of the most beautiful sights I had ever seen. My sister said it best when she wrote that it felt “both church and home.” I felt like I was back in the living room of our old place in Manila, beside my dad, just watching. 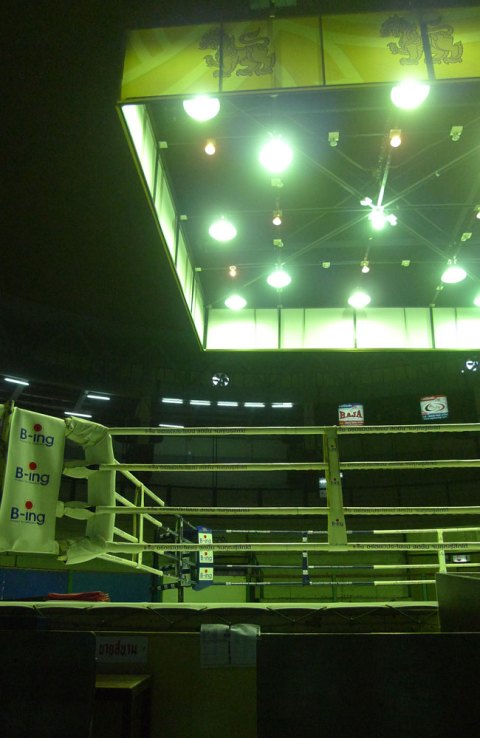 Watching the match thisclose, just behind the judges, was definitely worth it

We got settled behind the judges. Most of the audience (not surprisingly) were men, locals and groups of Americans, Japanese, Australians, etc. My sister and I pretty much kept to ourselves, watching intently, every strike and kick, being our father’s daughters.

If you’re thinking of seeing a muay Thai match live, here are a few things to take note of to help you appreciate the match (below is an excerpt from the muay Thai story I ended up writing for Smile magazine): END_OF_DOCUMENT_TOKEN_TO_BE_REPLACED

With a few more travel notes to share on my trip to Bangkok with my sister, here’s another entry on what became our favorite stop of the BTS Skytrain: Siam. 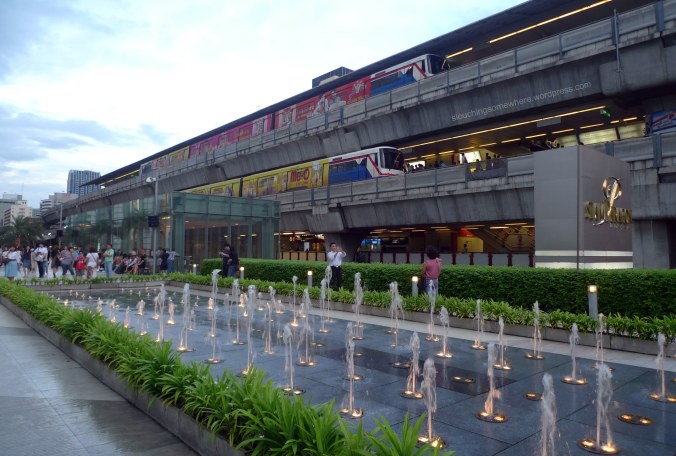 View from Siam Paragon: The trains of Sukhumvit and Silom lines make a stop at Siam

Siam Station is where the two lines of BTS (Sukhumvit and Silom) intersect. One side is lined with some spanking malls, from shiny Siam Paragon to Siam Discovery, while the other is a maze of small boutiques, cafes, restaurants, multiplexes, tiny alleys of shops, and tinier galleries that is Siam Square. Throughout our vacation in the Thailand capital, my sister and I found ourselves returning to the station and to the square, where there were always shops, restaurants and corners to explore.

We were introduced to the place on our first night in Bangkok. Coming straight from the airport, we headed to Siam Square to meet two friends for dinner before their flight back to Manila. Over our first Thai meal of Pad Thai noodles, Tom Yam soup, and other local dishes, our friends who regularly go to Bangkok, shared their favorite places to wander around in the city and Siam Square was one of them.

END_OF_DOCUMENT_TOKEN_TO_BE_REPLACED

During weekend mornings, many folks in Metro Manila (at least those who wake up before lunch time) like to troop to the weekend markets around the city. The more popular are Salcedo and Legaspi markets in the CBD of Makati, Mercato Centrale in Bonifacio Global City, and Sidcor Market in Centris along EDSA corner Quezon Ave. in Quezon City (which is where I usually go to after early morning runs, since it’s a few minutes away from the house).

The one Saturday morning we spent in Bangkok, my cousin took me and my sister to the weekend market of her neighborhood to buy our breakfast. Bangkok is certainly well-versed when it comes to shopping and weekend markets. You only have to find yourself in the middle of the sprawling Chatuchak Market, three hours into your shopping and having covered only a row or two of shops to know that Bangkok is serious about shopping. And attracting shoppers. Suan Luang weekend market though, located in a quiet residential area, is not massive nor touristy (shoppers are mostly residents), but the finds are fantastic for anyone in the mood for local Thai food.

A part of the Suan Luang market

When we got there, apparently the area near the Suan Luang park, where the weekend market usually sets up, was undergoing some sort of construction or renovation, so the stalls were spread out on the sidewalks and the parking spaces. Good thing my cousin still found her favorite stalls: the one that sells grilled bananas (love this!), another that sells satay or grilled chicken, one that sells steamed brown and white sticky rice (which had quite a queue), and the milk tea stall of a husband and wife who spent the rest of the week working in a law firm.

My favorite Thai food discovery in the market: grilled bananas

END_OF_DOCUMENT_TOKEN_TO_BE_REPLACED

I stumbled upon this old Nike ad in this engaging runner’s blog a few days ago. Well, it was one effective and guilt-inducing ad copy that immediately made me lace up and go for a run. My two-week (I’m in denial and I’m sticking to my story that it was just two weeks) hiatus from running came about during and after the trip to Bangkok.

I know I wrote it here somewhere that I plan to look for places to run and actually go running whenever I travel. Well, I did pack my running shoes, but I also ended up bringing a bunch of assignments with me on the trip. (Never a good idea. But you know what Nike will say…) The one morning I didn’t have an article to finish, I woke up early, put on my running gear, and headed out my cousin’s apartment all set to run. The neighborhood was pretty nice, with its wide, quiet roads and it appeared perfect for running. But then there were stray dogs roaming around, and pretty soon a lot of speeding cars were on the road, and there were no sidewalks, and…well, there’s always something. Excuses tend to snowball that way. And before I knew it, I was making my way back to the apartment.

Back to the apartment. Didn't get to run.

The day before we flew back to Manila, I did find a place where I could have gone for a run in the heart of Bangkok. Lumphini Park. It’s located in this very busy intersection, where crossing the street initially appeared to be a mystery. (We were not alone, when we got back to the Lumphini MRT Subway station, we overheard a fellow traveler asking a security guard where the park was. The guard didn’t understand English so I stepped in and told her it was just across the street. “But where do you cross?” she asked puzzled at the seeming absence of a pedestrian lane. But you can cross by waiting for the light to change on the major intersections and waiting for cars to let you pass in the other smaller roads.)

END_OF_DOCUMENT_TOKEN_TO_BE_REPLACED

Even if we got stuck in horrible Bangkok traffic on our first morning in the city, the fact was we still got to do what we had planned for the day. This included taking a boat along Chao Phraya River, considered Thailand’s lifeblood, to Wat Pho, Bangkok’s largest and oldest temple dating back from the 16th century.

Initially, we planned to check out the two on separate occasions: make our way to Wat Pho then ride a river cruise down Chao Phraya. But my resourceful sister, who pored over the Bangkok map, found that we could simply take the BTS SkyTrain (take Sukhumvit Line from On Nut, where we were coming from, to Siam station; then at Siam, change to the Silom Line) to Saphan Taksin station, where the Central Pier (Sathorn Pier) is located nearby. This is where the Chao Phraya Tourist Boat docks and for 25 Baht, the boat stops in several piers including the Tha Tien Pier, where Wat Pho is a short walk away.

Waiting for the Chao Phraya Tourist Boat at the Central Pier