The coastal town of Laiya in San Juan, Batangas is one of the closest beach destinations from Manila. While it doesn’t offer white, powdery soft sand, its proximity to the city makes it a convenient choice for a quick beach getaway.

The Laiya resort that my friends and I used to frequent more than a decade ago was La Luz. It was a small resort, the kind where most visitors seemed to know one another–at least that’s how it was for my friend who introduced us to La Luz and who went there whenever she wanted to make an escape involving some sand and sea.

When this same friend, who’s now based in Australia, wanted to spend a few days on a beach in her recent short trip to Manila, we were not surprised we ended up in La Luz. It was a chance to revisit the resort with old friends and make new memories there with Z.

END_OF_DOCUMENT_TOKEN_TO_BE_REPLACED

If you still think that traveling around the Japan will cost you an arm, a leg and a kidney, then you’re not looking hard enough. There are free tours available in the country, most of which will give you a taste of Japanese culture–which can be in a glass of whisky. END_OF_DOCUMENT_TOKEN_TO_BE_REPLACED

I wasn’t looking forward to the boat ride to Sabtang Island.

One of the three inhabited islands that make up the province of Batanes, Sabtang captures what most travelers imagine Batanes to be–towns lined up with traditional stone houses, unforgiving cliffs overlooking raging waters, rolling hills, white beaches, and a pastoral charm that easily lends itself to getting off the grid.

“You have to go,” a fellow guest in Fundacion Pacita told me and my companions the day before. He had just returned from Sabtang and was regretting his choice of not spending more time in the island. And it’s just a 30-minute boat ride from Batan. I wasn’t too sure about the use of ‘just’. Since you need to cross the waters where the Pacific Ocean and South China Sea crash onto each other, we’ve been warned by locals that the boat ride could get rough. It’s the reason why around 1 pm, the last boat from Sabtang going back to Batan departs.

“Just breathe in when the boat heaves, breathe out when it drops,” a friend advised me. I’ve had more bouts of seasickness than I care to remember and I didn’t want to end my Sabtang day trip hurling over the boat. True enough on the afternoon ride back, the waves would forcefully lift the faluwa (the local motorized boat) and then carelessly toss it back down. Cue the screams and nervous laughter of most passengers, including myself. Eventually, we all fell quiet. The waves were unrelenting. I was breathing in and out along with the motion of the faluwa, and while my stomach still felt it would get left behind in my throat, I knew I would get through it without having to eject the Ivatan lunch I had earlier.

And yes, fellow guest was right. You have to go. Every visitor of Batanes must go to Sabtang. Here are a few reasons why. 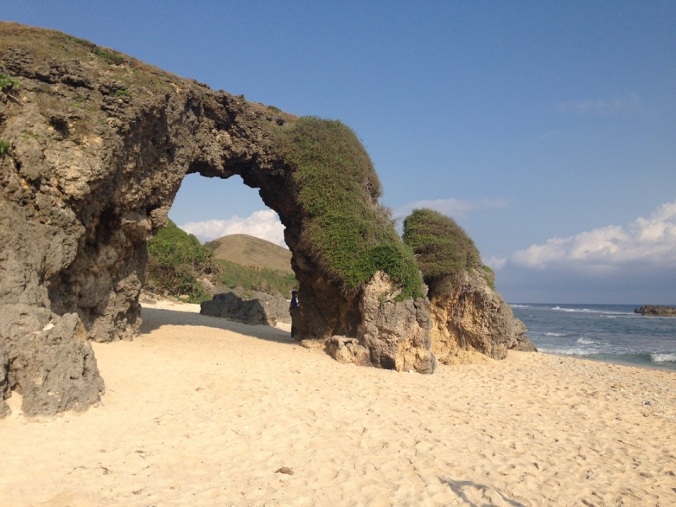 One of the most recognizable images of Batanes, the Mayahaw Arc

When we reached the Port of Sabtang, from the Ivana Port in Batan, our tricycle driver-slash-tour guide was waiting for us. (You can make arrangements with your guesthouse or hotel for a tour in Sabtang. Or bring your own bike across the island and explore it via your two wheels, which I saw a few people do.) Our first stop was Morong Beach. This white pebbly sand beach is home to a distinct rock formation known as the Mayahaw Arc.

For as long as I could remember, the image of the arc was one of those that stuck with me when my friends showed me pictures of their Batanes trip almost two decades ago. And it’s always fascinating and humbling being able to stand in front of a place you previously only held in your thoughts. END_OF_DOCUMENT_TOKEN_TO_BE_REPLACED 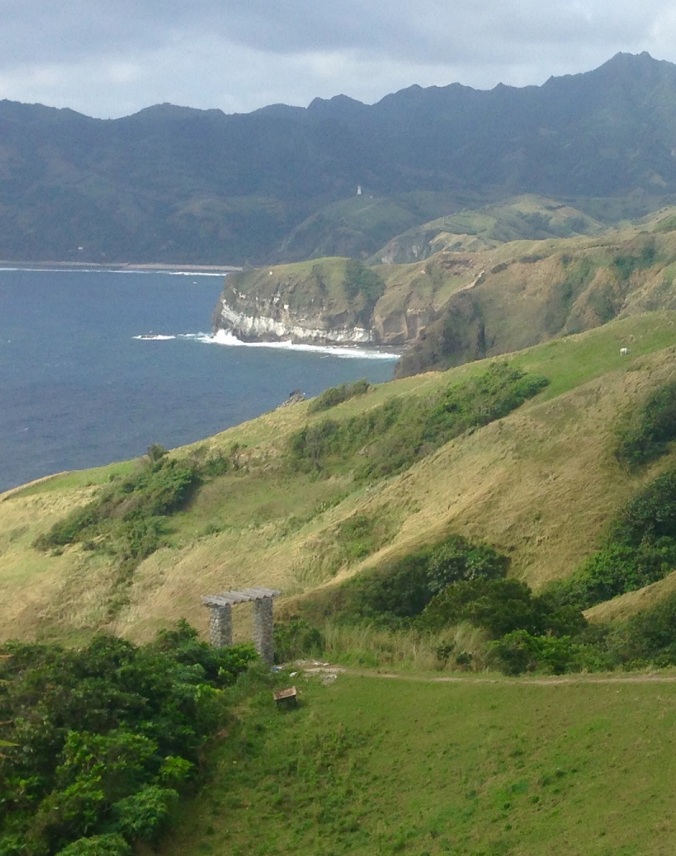 Batanes. If you live in the Philippines, chances are that name can evoke beautiful, unspoiled pastoral images of rolling hills, rugged mountains, an unobstructed expanse of sky and water, and an idyllic way of life. It’s the northernmost island province of the Philippines, separated from the rest of Luzon where the Pacific Ocean and South China Sea meet. Because of its location, Batanes gets a ceaseless beating from the strong winds and typhoons during monsoon season. It’s one of the more remote spots in the country and like most fellow Filipinos, it’s a place I’ve always want to see.

Early this March, I found the perfect excuse to go. We launched in Batanes Asa Ka Awan du Vatan (A Year in Batanes) under Firetree Press, the small book publishing house I am a part of. The book can be a travel journal of sorts, but it’s really more of a precious collection of watercolor paintings by Victoria Abad-Kerblat and different Ivatan artists with a month by month guide on the rich heritage and traditions of Batanes.

The day before the book launch, my colleagues and I got to make our way around Batan, the main island of Batanes, where the provincial capital of Basco is located.

END_OF_DOCUMENT_TOKEN_TO_BE_REPLACED

Almost a month ago, I went on a travel assignment north of Manila to a couple of provinces. The theme was nature and adventure and if you’re coming from Manila or Clark, there are a lot of choices just a couple of hours away, from Pampanga and Tarlac to Zambales. (Update: Here’s a link to that  magazine article)

I finally tried to learn how to surf. Tried. But I think I ended up mastering the art of falling into the water. Get on the board and then fall again. Which was a far cry from another water activity I tried the day before, the bandwagon, where I refused to fall at all. It appeared to be a breeze–just sitting down on an inflatable couch while it gets pulled by a jetski–but I ended up screaming my lungs out, holding on for dear life so as not not to get thrown off into the water, and wondering what the hell was I doing. It’s no surprise that what I most appreciated in the trip were the times I ended up having to do nothing. Oh, age. You make me want to just chill, stare at sunsets, and maybe have a massage.

In the small village of Pundaquit in San Antonio, Zambales, you can do some of those things.

The beach in front of Capones Vista Resort in Pundaquit in San Antonio, Zambales

Peace and quiet in a cove near Capones Island 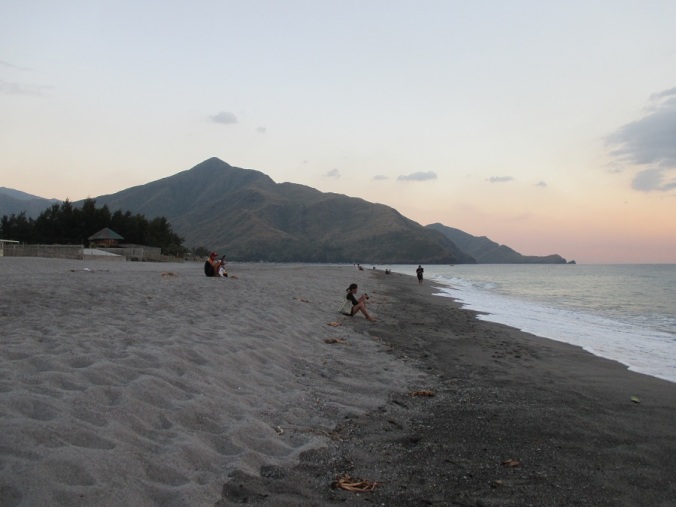 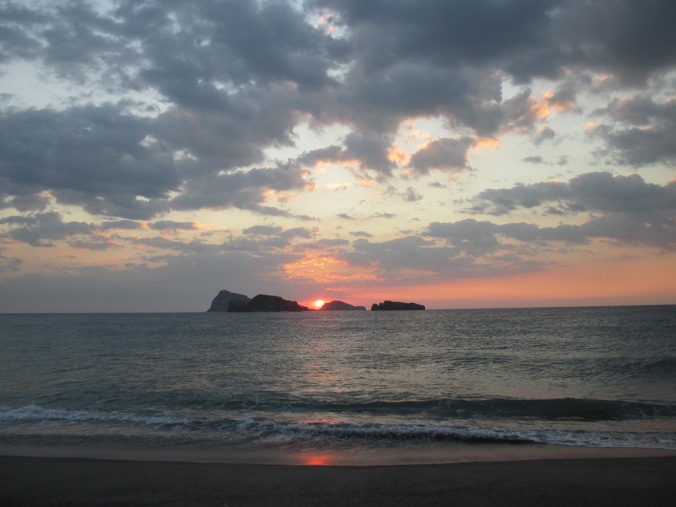 There’s always a beautiful sunset just waiting at the beach

End of the day