C.S. Lewis wrote in his Collected Letters that “There are far, far better things ahead than any we leave behind.” These words have been on repeat in my head at the start of this new year. But to be fair to 2014, even with its challenges and upheavals (which partly account for my absence in this blog), it also brought joy and new experiences that I’m grateful for. 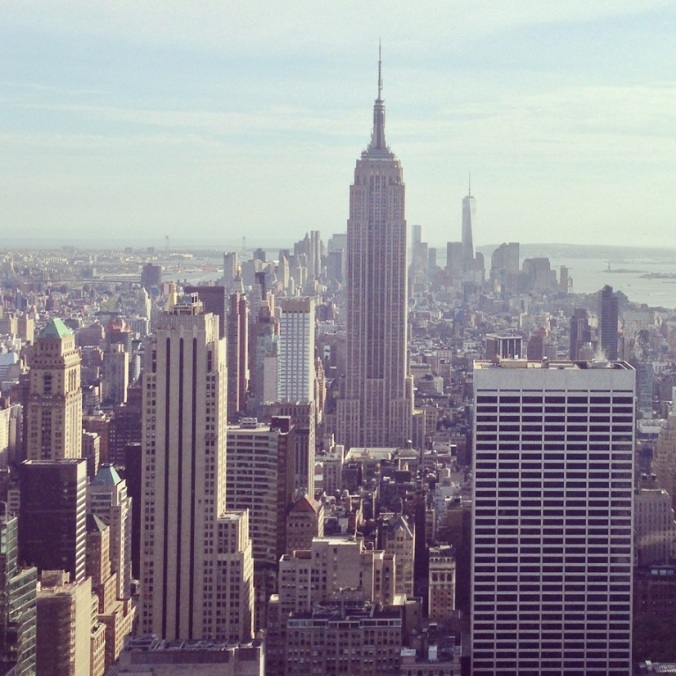 View from Top of the Rock last May 2014. Thank you, New York City

When it came to travel, getting to see New York City for the first time was one of the more incredible things that happened last year. I’ve always wanted to see it (I even committed to memory the map of Manhattan when I was in high school for some reason), but in the past few years, I’ve started to think it impractical for both me and my husband to go there for vacation. Then when a work opportunity for a trip to go there materialized, my former boss, who knew of my fascination for New York City, asked me if I wanted to go for the team. Of course my immediate response was a big YESTHANKYOUVERYMUCHWHENDOYOUNEEDMETOFLY?!

However, as the day of the flight approached, I started getting anxious. I was finally going to see New York City, one of my travel dreams was coming true… but it was also going to be my first time to travel to the US and it was also the first time I was going to be traveling on my own. I realized that in all my travels I was either with my husband, my family, a group of friends, or when it was for work, other folks from the media. So even if I was in a new place and didn’t speak the language, I was still surrounded by people I knew. And there’s always comfort in that.

Until those few days leading up to the flight, I always thought I was that kind of girl who would, without hesitation, jump on a plane, a ship, a bus to travel long distances on my own to cross an item off her bucket list. Turns out, I was the kind of girl who got anxious about the idea of solo travel in a foreign land.

A few years back, I once had to reassure a dear friend over the phone who was in a state of panic when she ended up having to travel solo in Europe that it was okay to step out of her hotel, to just explore the nearby streets first if she was scared of getting lost, and that everything would be okay even if she was alone (It’s always easier to dispense advice than take it, isn’t it?). My husband patiently offered me those same reassurances as I wondered aloud before the trip whether the tall Americans would stumble over my small frame. “There are short people in New York too,” he teased. Or if I should ask my boss to offer the trip to someone else. “You know you really want to go,” he reminded me so many times I’m surprised he didn’t just roll his eyes by the nth time.

And I really did want to go. I knew I would regret the decision if I didn’t take that trip. So I went. The fear was still there–during the event I was covering, going up to strangers to ask for directions, finding my way around the city–but there was also a pinch-me-I’m-dreaming giddiness and  excitement during the entire trip. While some friends were able to accompany me to have lunch or dinner, see museums or walk the Brooklyn Bridge on some days, most of the time I spent on my own.

I got lost looking for Chelsea Market (but found it!) and took a stroll along the High Line. I looked for Levain Bakery and patiently waited for my friend to meet me there while I inhaled a cookie and hoarded a few more before leaving. I walked from Javits Center to 33rd Street and ended up going further down to the Flatiron Building, where I grabbed a bite to eat in nearby Madison Square Eats and felt a pang of loneliness as I was sandwiched in between several young couples, who looked like they were about to party. Then I walked further to Union Square to have my own solo celebration in between the shelves of Barnes & Noble.

I got to navigate through the throngs of people and too-friendly mascots in Times Square and found refuge in Midtown Comics. I kept going back to Grand Central Terminal to take in the beautiful interiors and finish off a New York Cheesecake in its basement food court. I did the touristy thing and went up to the Top of the Rock to see the spectacular expanse of Manhattan, which until that trip was only a map in my head. I asked a few fellow tourists to take my picture and I took theirs (apparently, we hadn’t heard of the phenomenon called “selfie”). A few times, I approached several people for directions and train transfers and everyone was helpful. And tall people didn’t stumble over me. I survived my first solo trip and as it often turns out, the stories in my head were far more intimidating than the reality. 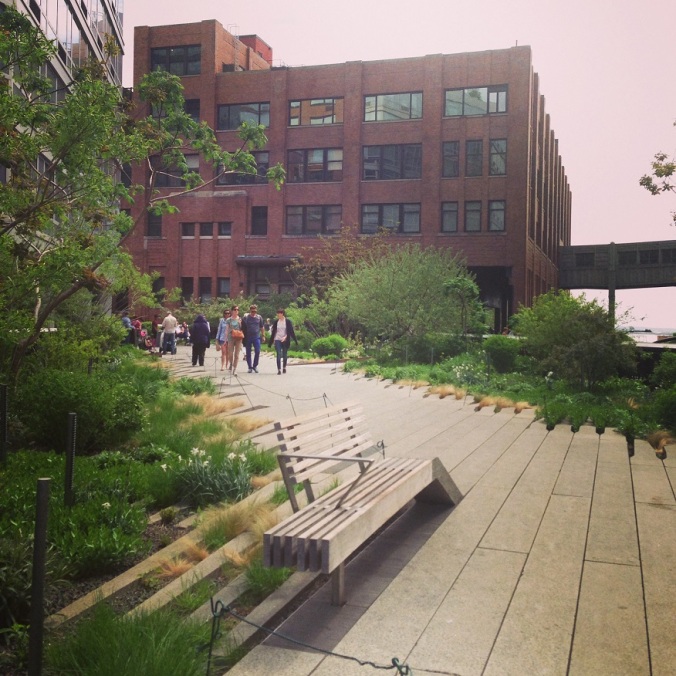 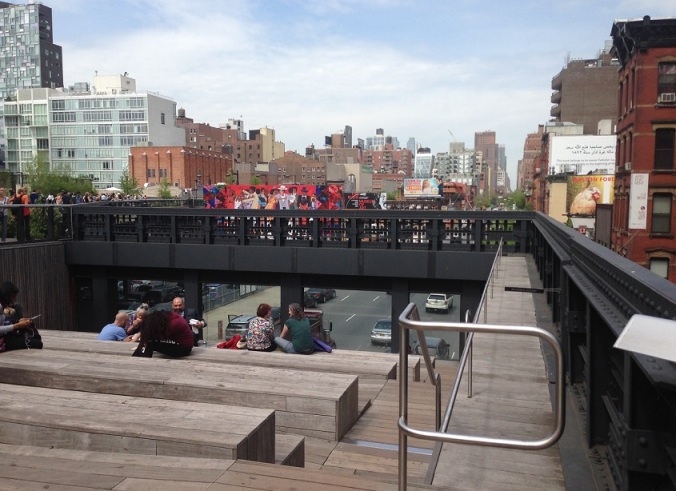 There are many parts in the park where you can sit down, watch the city below, or eat your lunch from nearby Chelsea Market 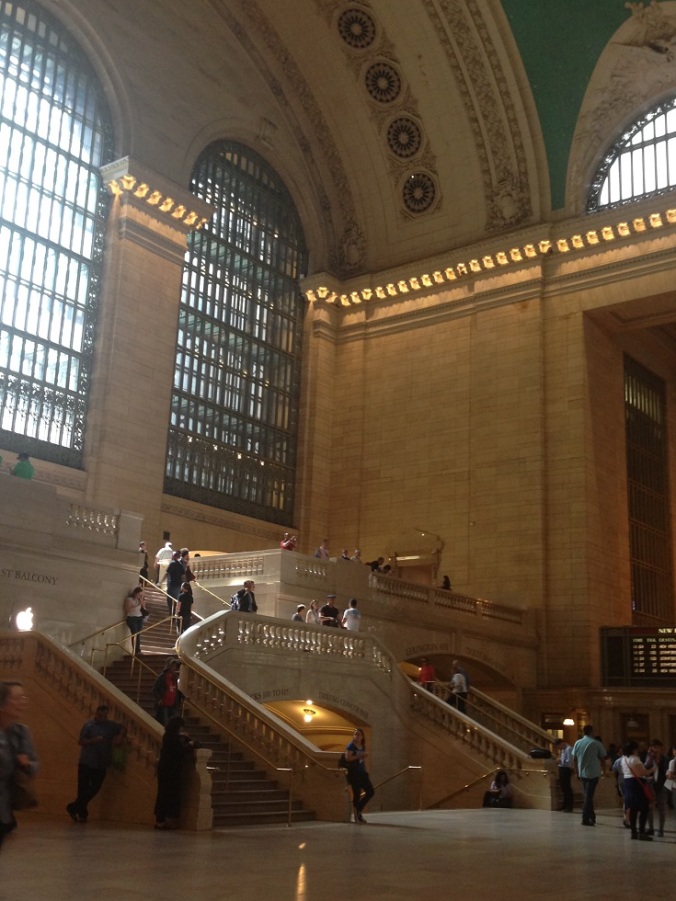 Whenever I felt lost, I would find my way to Grand Central Terminal to get my bearings… 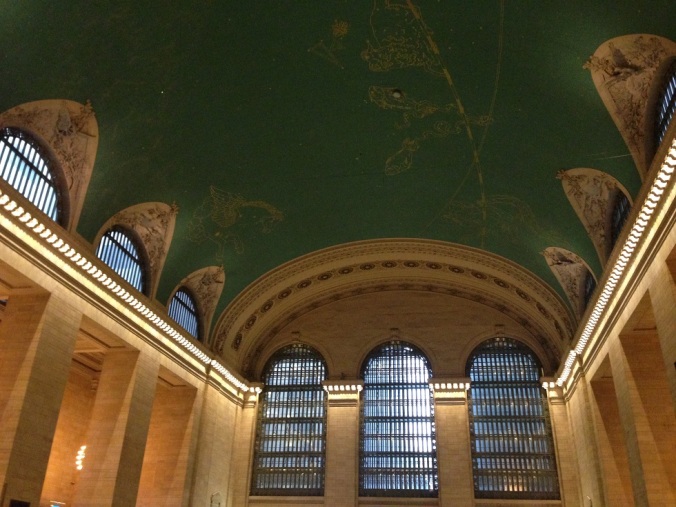 …and find time to look up 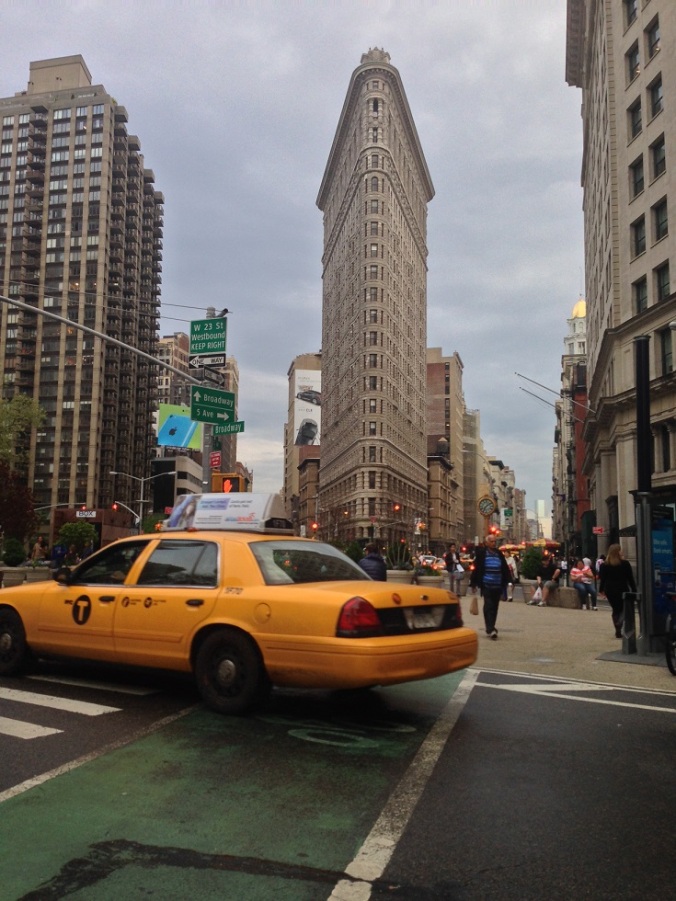 There were many times I wished I was with my husband or my friends as I walked around Manhattan, especially the late Saturday afternoon I spent walking from this iconic building to Union Square

This year, while there are no New-York-City-scale trips being planned or another round of solo travel, I am, in a way, off to a new adventure in terms of work and family life. And as much as I am grateful for 2014, I believe there are far better things ahead. Happy times. Have a great New Year, everyone!