One of my most cherished food memories was when my family and I would go to my dad’s hometown in Pampanga to attend its annual fiesta. The trip would be hot and dry and dusty, and occasional tantrums would ensue… but by the time we reached the gate of our uncle’s house, we were happy to see our cousins and to ooh and aah over the activity in the dirty kitchen (which, for those not familiar with it, is the part of a traditional Filipino house  where the dirty prep is done).

At the dirty kitchen, in front of the sprawling backyard, we would watch our aunt, uncle, and the cooks prepare the lunch over big pots and kaldero, watch the fresh hito (catfish) swim in a planggana of water before they get grilled, and sneak in bites of the tibuk-tibuk and other rice cake varieties already spread out on the table. We would then be called to have some breakfast, typically pindang damulag! It had a gamey, sour flavor (vinegar-y version of tocino I always thought) that my 10-year-old self didn’t flinch at all when I eventually found out that it was fermented meat from carabao, not exactly what you might find in a supermarket in Manila.

By the time lunch came, I would pile my plate with Kapampangan fiesta staples such as asadong matua, kare-kare and lechon. (I was a carnivore early on.) My dad used to make me try the buro or balao-balao (fermented rice) to go with the grilled catfish but I found the smell revolting. Only when I reached my twenties, did I finally acquire a taste for its soupy, sour assault to the senses. By then, trips to Pampanga were no longer an annual activity and once deprived of such fascinating dishes, I craved and searched for them; they’re not your typical everyday fare so my dad wasn’t keen on cooking them. 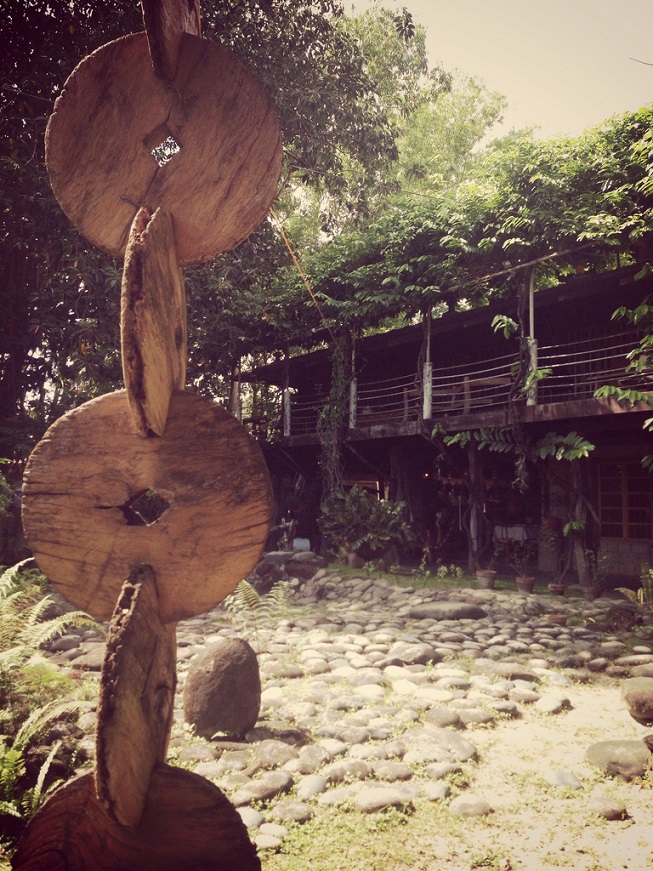 Almost a month ago, I got to revisit my Kapampangan roots when our department at work took a field trip to Bale Dutung. For several years, I’ve only heard good things about this private restaurant that is also  home of artist, author and chef Claude Tayag and his wife Mary Ann. It gained even more following and fame when Anthony Bourdain paid them a visit in a feature on the Philippines in his then-show, No Reservations.

Located in a subdivision in Angeles, Pampanga, it  is open to the public for pre-arranged lunches.But making a reservation is not that easy as you need to be a group of 12 and the cost is more than P2,000 per person (at least for the menu we had). Pricey, yes, but if you think about it,they roast an entire pig for the meal and on top of that, you get a generous helping of food stories from Mary Ann, who will strongly advise you to “taste everything until the end of the meal.” Words you’ll need to keep in mind when you reach that point when you think you can’t go any more further. Not. Another. Bite.

Bale Dutung (which means ‘house of wood’) offers different menus: there’s now the Bourdain menu (or what Tayag served  the travel host during his visit) and the Lechon 5 ways menu, which is what was served to us. But before the meat-heavy meal, we had crackers served with three dips: Bale Dutung’s Claude 9 Taba ng Talangka (crab fat), Burong Hipon (fermented shrimp rice) and pesto made with local pili nuts. Good thing they were only served in small plates because we could have kept eating them and it was only the start. 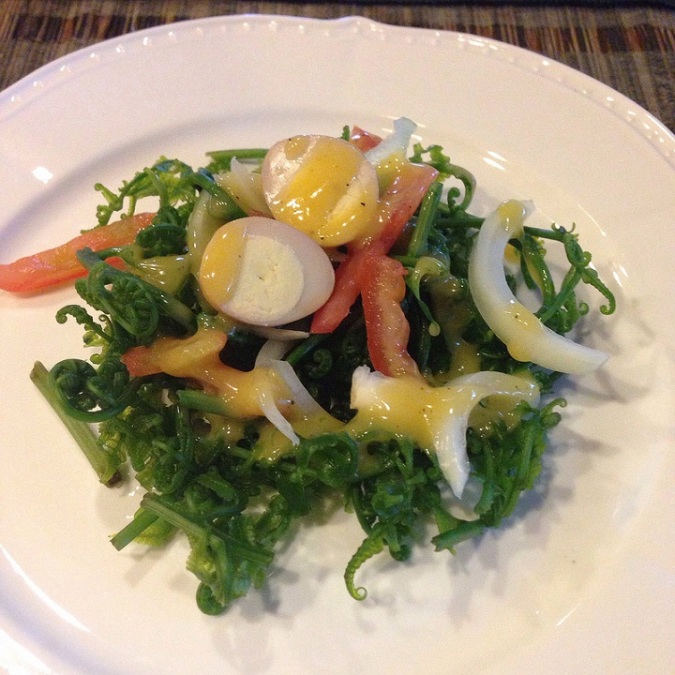 The first course of the meal: Ensaladang Pako (Fiddle head fern salad). This version, where the pako is not blanched, is tossed with onions, tomatoes and a quail egg.

Some of the dishes were Kapampangan classics (the fermented shrimp rice, lechon, kare-kare, sisig), others a reinvention of other regional dishes (inasal na manok) or just dishes I had never encountered (or paid attention to) in those past Pampanga trips (ensaladang pako, lumpiang ubod).

Piniritong Lumpiang Ubod (fried vegetable spring roll) with Claude ‘9 Oriental Sauce (made from lemon coriander and Thai basil sauce). It was refreshing and had an unexpectedly bright flavor even though it’s fried 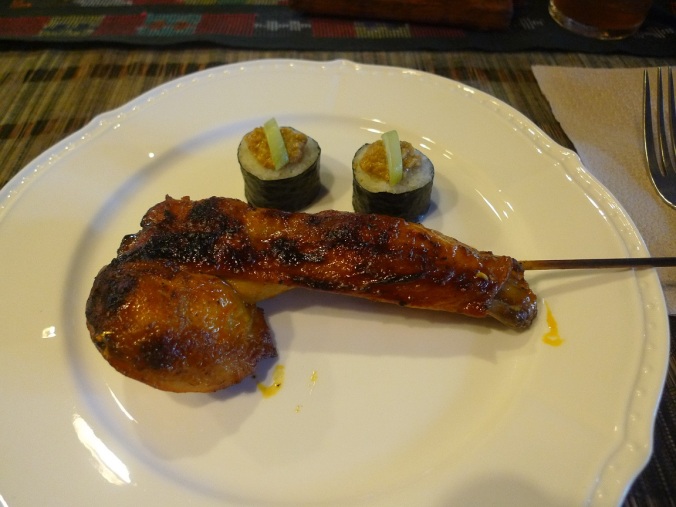 Inasal na Manok with Claude ‘9 Talangka Sushi (BBQ chicken wings with lemongrass marinade and crab fat sushi). Inasal is a dish from the Visayas, which gained popularity across the country in the past decade. The inasal of Bale Dutung is a good version…made even better with and the talangka sushi

One of my favorites! Hito at Balo-balo sushi (the fermented shrimp rice with catfish rolled in mustard greens). Take one each! Not everyone in our table was crazy about this so I think I got to eat two.

You can assemble your own ‘Lechon Taco’ or crispy roast pork flakes on a tortilla. Top it with cilantro, onions, tomatoes and that tasty Claude ‘9 Oriental Sauce

After the loud richness of the lechon skin and the roast pork flakes, the Sinigang na Lechon (roast pork meat in sour broth) was like a soothing melody, providing one’s taste buds a reprieve from the fried, fatty flavors that came before and which will come after. (Walking around the rustic compound in between dishes helped, too)

At this point, we couldn’t believe there was still more to come… the fourth dish from the lechon: Inihaw na Tadyang ng Lechon at Ensaladang Talong (grilled pork ribs with eggplant salad). I’m sure I would have enjoyed this pairing more had I not had around four meat dishes beforehand.

The lechon finale: Lechon Sisig (pig’s cheeks with onion and liver) and served with pig’s brain on the side. While my younger (and hungrier) self would have probably devoured a serving of this delicious Kapampangan culinary invention easily, I only managed two spoonfuls of it and a taste of the pig’s brain, the latter I didn’t care too much for. But this pairing of the crunchy sisig and soft, creamy pig’s brain, according to Mary Ann (background) is supposedly where some restaurant owners got the idea of mixing sisig with mayonnaise (cheap alternative to brain). 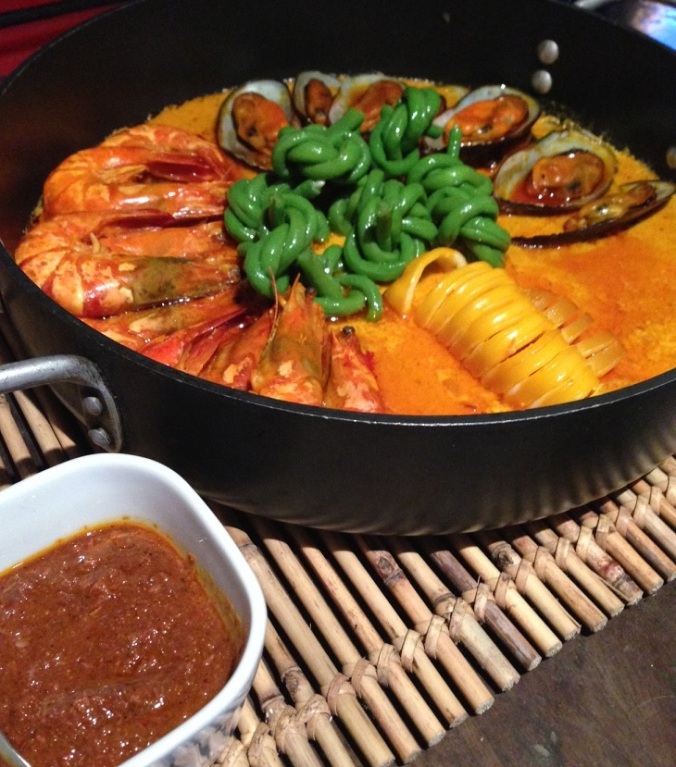 After all the meat, here’s a serving of seafood: Kare-Kare Dagat (Seafood in Peanut Sauce) with bagoong (shrimp paste) on the side. Kare-Kare is traditionally cooked using oxtail and tripe but the flavors of Bale Dutung’s peanut sauce still transported me to those Pampanga fiestas, not only because it was one of the best I’ve tasted but it also reminded me of how I would feel at the end of every fiesta lunch–so full you don’t think you can take another bite.

Oh, but there’s more. To cap off the four-hour lunch, the meal had this for an ending: Paradiso, a dessert of macapuno, ube and yema balls. I tasted a teeny bit of each before I fell into a food coma. In Bale Dutung, where every dish has to sampled, remember to savor only a small bite of each if you want to survive, I mean, enjoy, until the very end of the meal. Happy holidays and happy eating!