Since I got married several years back, my husband and I try to celebrate our wedding anniversary in a new place every time. We didn’t really get to travel together before we got married, but we knew we wanted to see more of the world, or at least as far as our modest savings will allow us.

So after we said our ‘I dos’, we also took it as a vow to regularly travel…in good times and bad, in upset tummies and un-sexy coughing fits; to have no qualms about roughing it when called for and to hold on to our sense of humor, from this day forward, for better or for worse, until delayed visa applications do us part.

This year though, we decided to simply spend our anniversary at home. It is a new place for us, a new home, and we love our little flat, but it made me feel nostalgic for our annual travel tradition–enough to shamelessly make me take a look back on them and how our travels have made us better for each other.

In a tuktuk around Angkor last year (just realized that P and I don’t have a lot of photos together unless we’re traveling with other people; hence the let’s-take-our-own-photos-while-in-this-tuktuk picture)

Because traveling can push you out of your comfort zone, you find out how you and your travel companion react within unfamiliar territory. Two close friends traveled for the first time a few years back and returned vowing never to travel together again. They’re still friends, but only in that foreign setting did they realize they had different views of how to travel.

While I knew of my husband’s quirks, his strengths, what annoys him, what he has to avoid to stop him from running to the bathroom every second even before we got married, only when we started traveling together on our own did some of those things become more pronounced. And after several trips together, we’ve learned to delegate the travel ‘tasks’ enjoyed by the other more. He’s great at packing and thinking of contingencies, (he let’s me believe) I am fantastic in planning itineraries and looking for the best value-for-money anything. We’ve also come to learn who, between us two chatty folks, turn reticent in certain situations; oh, the many opportunities for compromise, hah!

But in spite of the few situations where we wanted to leave each other outside a train station, traveling together made us (yes, I’m assuming my husband feels the same way) realize how much we genuinely like being with each other. Almost joined at the hip and not minding at all. Of course, travel can also reveal just the opposite, but P and I have been lucky to find out that every time we travel together, we both turn to giddy kids, thrilled to bits and anxious at the same time to be somewhere new or experience a place we’ve visited before but this time with each other. And then we come home wondering when we could do it all over again.

We went to Puerto Princesa for the first time back in 2008. This long, narrow stretch of beach is called Snake Island and this trip made me want to explore Palawan further 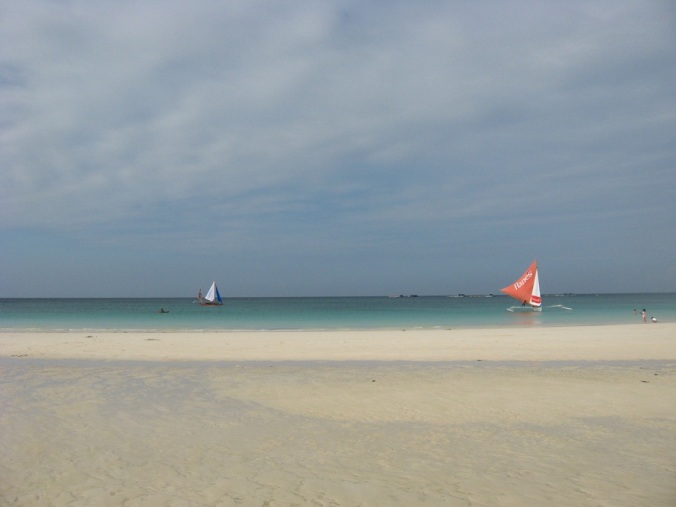 While we’ve both gone to Boracay, a popular beach destination in the Philippines, on separate occasions, it was our first time to go there together for our anniversary back in 2009. Aside from its powdery white sand and clear blue waters, it is known for its parties that stretch till sunrise; we discovered in this trip that we already like to go to sleep before 9 pm when we’re on the beach and wake up in time to see the party-goers coming home.

Another year for another beach destination–this time to Bantayan Island in Cebu back December 2010. What’s great about Bantayan is that you can do other things (like go to town, visit the old church, the dried fish market, etc.) aside from lounging by the beach the entire day–not that there’s anything wrong with that

5 thoughts on “A December tradition”