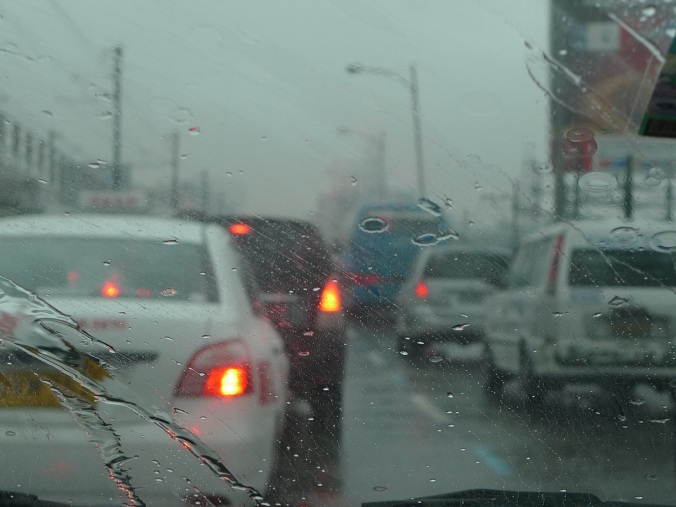 How the road typically looks for the past few days.

It’s been raining for the past few weeks, here in Metro Manila and in many other parts of the country. And it’s not one of those soft drizzle that just leaves the road wet and makes the weather a little cooler; no, it’s mostly heavy, furious downpour that leaves many roads and neighborhoods submerged in flood. (Many families living in low-lying areas or nearby rivers in different parts of the city and nearby provinces have actually evacuated–or asked to evacuate–because of the flooding.)

It is typhoon season and even if there is no storm signal (FYI for non-Filipino readers, the country has three storm signals and if you’re traveling here from June to early December, best be acquainted with storm warnings here), sometimes the southwest monsoon (yes, I’ve been watching too many weather updates) can bring alarming torrential rain, like today.

It’s best to stay indoors when this happens, but if you must venture out, check flooding and traffic updates here. And should you want to find some little comfort from food, here are a couple of local dishes that should be in your list for good rainy day Pinoy food.

Lugaw and arroz caldo. The local congee (lugaw) is a pretty simple affair. With roots from Chinese congee, rice is boiled in water with strips of ginger and typically with fish or chicken stock. At it’s most modest version it’s simply topped with crispy fried garlic bits and chopped scallions. The more generous versions include hard boiled egg and goto (beef tripe). If other cultures have their chicken soup, ours is lugaw when one is feeling a bit under the weather–or just sluggish because of the rainy weather.

Arroz Caldo is the Spanish-influenced version of Chinese congee. Aside from the ginger, garlic and scallions, it’s spiced with safflower (hence, the yellow hint of color) and instead of tripe, it has cuts of chicken.

It’s supposedly easy to cook; I made the attempt but wasn’t too crazy with the result since the flavor of the ginger was almost non-existent and the recipe I followed didn’t ask for ginger and garlic and other aromatics to be sauteed first, neither was the use of chicken or fish broth recommended. 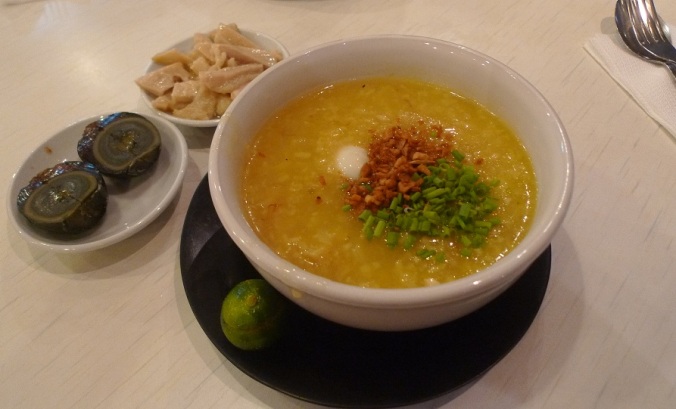 To satisfy lugaw or arroz caldo cravings without slaving away over the stove and ending up with some flavorless soupy rice, P and I headed to Lugawan Republic in Timog Ave. in Quezon City a few days ago, on our way home from work. The restaurant specializes in lugaw and other kinds of congee (including Chinese congee and vegetarian congee) so you’re sure to have a satisfying bowl. Its basic lugaw, which looks and tastes like arroz caldo minus the chicken bits, goes for only P60 (just over a dollar). I ordered an additional additional century egg (P45) and tripe (P45). The flavors of the ginger, fried garlic, scallions and chicken broth shone through each slurp.

Mami. A noodle soup found in many local Chinese eateries that’s made with beef, pork, or chicken broth and garnished with wonton dumplings and chives. Other local noodle soups that are found in different regions in the country, batchoy, molo, lomi and miswa, use different types of noodles, broth, and garnishings. 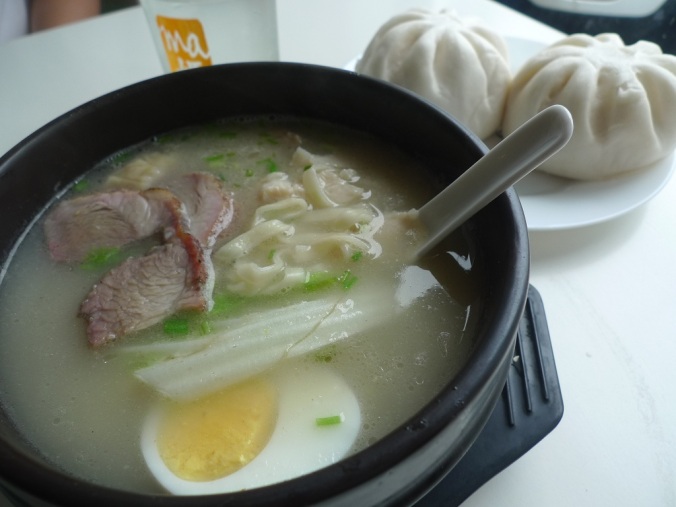 One of our go-to Chinese restos when we want an affordable and flavorful bowl of mami is Ma Chicken Mami House. The specialty, Binondo Mami, has a cloudy broth with an almost sweet but layered beef flavor and flat noodles with the right bite and which don’t lump together.

Champorado. Another rice porridge but instead of savory, it’s sweet. Champorado is made with sticky rice, cocoa powder and sugar. This local chocolate porridge is often served during breakfast, topped with milk and served with a little plate of salty tuyo (dried fish) on the side.

Nowadays, to remain on the healthy side, our family’s version of champorado is made of oatmeal (instead of sticky rice) and tablea (bars of local cacao). When I want a bowl of the real thing, I have one in Max’s Restaurant, a popular chain that serves Filipino dishes. Its champorado is thick and creamy with a deep and rich chocolate flavor. My only complaint is that they stopped serving it with tuyo. 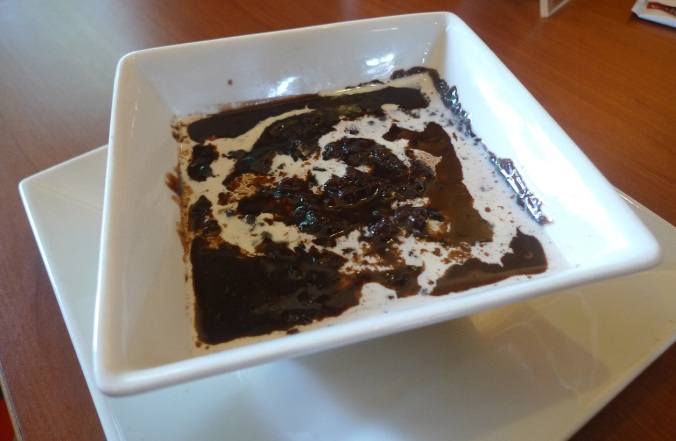 Among the many breakfast staples of Filipino cuisine, champorado is one of my childhood favorites–I don’t think you can go wrong starting the day with spoonfuls of something bittersweet and creamy, and nibbling on little pieces of dried salty fish to cut the sweetness–especially when the weather is this bleak.

(Btw, to help victims of the flood and non-stop rain, here’s a list of how to give donations)

2 thoughts on “Time for champorado, lugaw and mami (and for donations!)”