(The post below is another writeup on the temples of Angkor, but before we get into that, I just want to share about the terrible disaster that happened recently to some of the cities in the southern part of the Philippines: a tropical storm left more than a thousand dead (and still hundreds are missing), as flash floods swept through many shanty homes last Friday late in the evening. The local news now are filled with images of fathers and mothers wailing over their lost children, children left orphaned, entire towns wiped out. Those left behind need help. My friend Pinay Traveller, wrote a post on how to help the victims of typhoon Sendong, kindly take a look if you want to help. Let’s “go out into the world and do good until there is too much good in the world.”)

Since we only had four days in Cambodia, and days one and four were going to be spent on the road, we decided to take a tour of the Angkor temples on both days. Friends had told us that three days of temple hopping would be enough, beyond it and you might find yourself all ‘templed’ out. (Unless of course you’re an Angkor or archaeology enthusiast, then you can be there for weeks.) Two days for us regular tourists meant exploring Angkor Wat and the other temples in its vicinity for Day 1 and going to the farther temples on Day 2.

After spending the early morning in Angkor Wat, we told our tuk-tuk driver Savin (from Angkor Discover Inn)  that we wanted to see Ta Prohm and Angkor Thom for the rest of the day. We appreciated it that he also suggested additional temples along the way.

The ruins of Banteay Kdei and Ta Prohm

Ta Prohm was on top my must-see list in Angkor. It’s most known for those eerie images of massive centuries-old trees staking their claim on temple ruins with their massive roots draped over the walls and corridors. It was probably all those Indiana Jones movies growing up that had me fantasizing about walking through a jumble of ancient ruins and jungle.  (Ta Prohm was also one of the locations of the little known movie called Tomb Raider)

On the way, we passed by Banteay Kdei and Savin suggested we also take a look inside. It’s supposedly built in much the same style as Ta Prohm. A look at the free Siem Reap Angkor Visitors Guide will tell you that it was also “built using an inferior grade of sandstone and using poor construction techniques,” which has lead to much of its deterioration. That and the jungle. 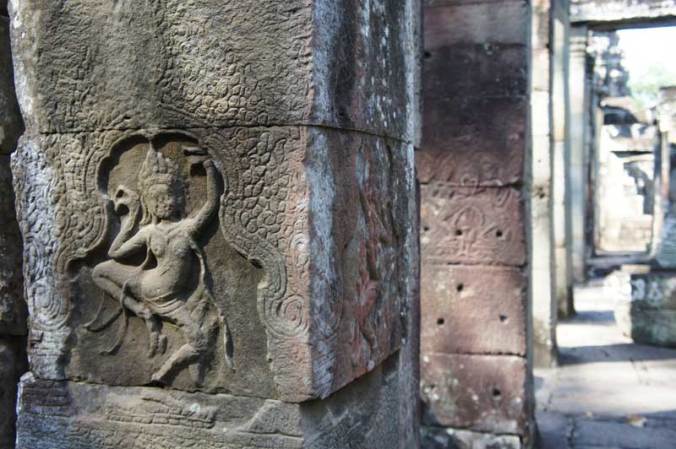 Love this particular small detail of an apsara carving 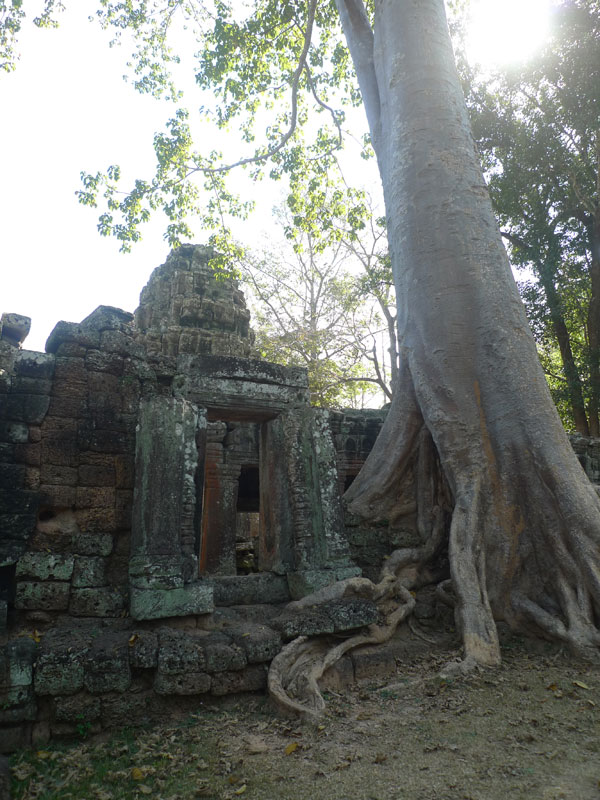 Banteay Kdei had some areas closed from tourists and a look at the scaffolding or the sorry state of some of the towers and corridors should have anyone in their right mind steering clear of them. (You don’t want centuries-old sandstone falling on top of you–even if they are of inferior grade. But signs such as “Do Not Touch” on certain bas reliefs or walls apparently do not have the same effect to most as other fellow tourists still kept touching them.)

But if I thought Banteay Kdei was in a bad state, it seemed a much larger area of Ta Prohm was in worse condition. It was undergoing major renovation so more areas were inaccessible to tourists. After a few minutes walking within the temple, I started wondering in which part you could see those huge trees. Though they’re probably the reason why much rebuilding or restoration was happening. Those ancient temple walls and doorways and corridors do not stand a chance against massive trees. Unless of course there’s a chain saw involved.

(A 2003 New York Times story on the architecture/art in Angkor mentioned the dilemma: “Faced with collapsed or collapsing structures, should one rebuild, restore or simply conserve? Whether to fill lacunae with newly quarried or recycled stone, and how much to decorate them, are all crucial questions. Ta Prohm’s voracious trees present a further problem: to chop or not to chop? The fate of each tree will be debated before chain saws arrive.”)

The fate of this tree seemed to have been decided. The root looks like it has been chopped off. 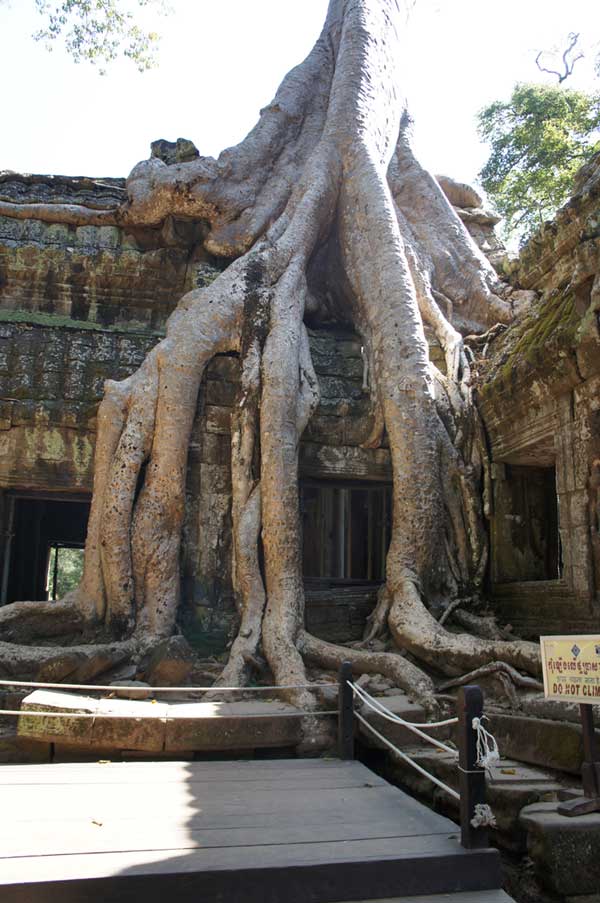 The roots on this tree remain intact. This is such a famous part of Ta Prohm that there’s already a platform for photos…and a sign that says, Do Not Climb. So it seems people have made attempts?

On the way to Angkor Thom from Ta Prohm, we stopped at Ta Keo (a temple-mountain like Angkor Wat, but smaller and without much carvings), and the small temples of Chau Say Tevoda and Thommanon, which are just right across each other. 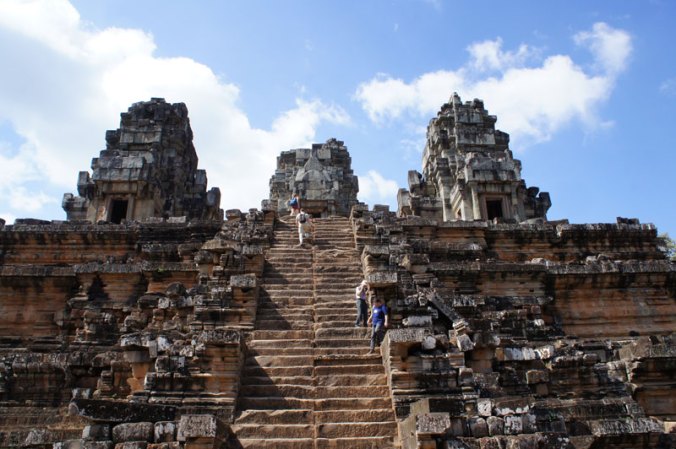 A steep climb to the top of Ta Keo

Thommanon, also built in the Angkor Wat style. It was at this stop that I thought the temples were starting to look like each other. So we decided to take a break and have our late lunch nearby.

Angkor Thom was the last capital city of the Khmer empire and it covers a vast area of the Angkor Archaeological Park. It was our last stop and my sudden onset of temple fatigue vanished when we climbed up to the Bayon and saw the huge faces carved on its many stone towers. You’re not sure whether they are smiling or smirking down at you, but you can’t help but stare. When you climb to the top and you’re surrounded by all those carved faces on each tower–it’s truly an impressive sight. (Supposedly, the face bears a resemblance to Jayavarman VII, the legendary Cambodian king who was behind the construction of Angkor Thom back in the late 12th century.)

One of the 216 huge faces of Avalokiteshvara in the Bayon

In one of the narrow corridors of the Bayon

A walking distance away from the Bayon is the temple-mountain of Baphuon, which was undergoing extensive renovation

Then we walked over to the Terrace of Elephants, a 350-meter long viewing platform with carvings of elephants. It looks out to the road, where colorful parades used to take place

One of the gates of Angkor Thom 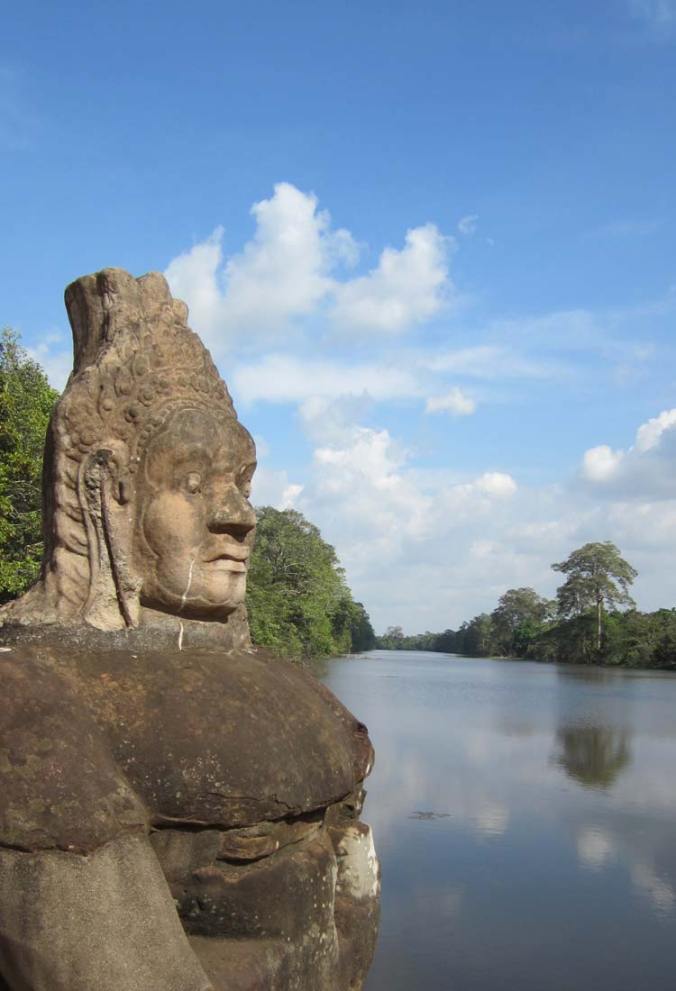 Our Angkor route for the day: sunrise at Angkor Wat, inside the grounds of Angkor Wat, back to the inn for breakfast, Banteay Kdei, Ta Prohm, Ta Keo, Chau Say Tevoda, Thommanon, late lunch nearby Angkor Thom (14 USD for 2 people), Angkor Thom in Bayon, Baphuon and Terrace of the Elephants. Time 5 a.m to 3 p.m. Cost of tuk-tuk 20 USD (5 USD more than the going rate of 15  USD for the nearby temples, because it had an early call time for the sunrise viewing)

6 thoughts on “Beyond Angkor Wat: exploring Ta Prohm, Banteay Kdei, Ta Keo, the Bayon and the other ruins of Angkor”