My sister is heading off to Palawan in a few days and while I know she’ll be spending a large part of it writing and meditating, here are a few things she (or anyone with Palawan plans) should try in the country’s ‘last frontier.’

1) Island-hopping. As Palawan is composed of more than 1,700 islands, you can spend days hopping from one powdery white beach or rocky cove to the next. If you’re heading to its capital of Puerto Princesa, Honda Bay is the most convenient group of islands that can provide the requisite, sun, sand and surf. To make the trip even more convenient, you can book a tour with the inn or hotel you’re staying in (which we did through Casa Linda–more details on that at the end) as they usually have their own recommended tour groups. It comes out around a couple of hundred pesos more expensive, but it means being picked up by a van to take you to Brgy. Sta. Lourdes, which is 12 km away from the capital, where the boats to Honda Bay are docked; having a designated boat for the island-hopping; no worries about the different entrance fees of the islands (admittedly though, most are cheap at P50 per person); and being served lunch on the beach. Of course, this also means traveling with a group of strangers, but if you’re feeling sociable, it’s a great way to meet other travelers.

We spent the entire day either soaking in the sun or wading in the waters in front of Pandan Island, Snake Island (my favorite for its two-kilometer stretch of sandbar), and Starfish Island (where we did see some starfish).

2) Seeing the ‘last frontier.’ While there are also a lot of amazing beaches to see around breathtaking El Nido and the laidback town of Coron, those popular destinations are also where you can see why Palawan got the ‘last frontier’ moniker. In Coron, behind a steep climb and descent on some rough and imposing rock formations, you can find the pristine and turquoise freshwaters of Kayangan Lake (P200 entrance fee) and Barracuda Lake (P100). (For me, the climb and descent to Kayangan, though longer is relatively more manageable than the scary, jagged limestone formations to Barracuda. But slipping on both means getting a nasty gash, so be careful.) If you manage to get past the climb/descent (I didn’t in Barracuda. I think my legs were not long and flexible enough), reward yourself with a jump into the cleanest freshwater lakes you’ll ever see. Kayangan is so clean and blue, it has earned the name ‘Blue Lagoon.’ (Boat rides around Coron starts at P1,500 and will depend on the destinations.)

Behind these jagged rock formations is Barracuda Lake

You can find even more beautiful and seemingly isolated lagoons in El Nido (until you see the other tourists, that is), particularly at the Small and Big Lagoons in Miniloc Island, which is around 40 minutes away from the town via pump boat. You can jump into the water and swim into the lagoons through a narrow opening of the large limestone walls or explore the lagoons via kayak. If your idea of paradise is in some island destination, then the lagoon and beach sceneries in and around El Nido is very likely one of the most breathtaking you’ll ever see. (Sorry, my El Nido photos from a few years back are missing in action, boohoo)

3) Snorkeling. You can do this in the waters of Honda Bay or Coron, but I think the deep blue sea surrounding El Nido and its nearby islands have some of the best coral formations in the country even for some shallow snorkeling action. It’s well-known that Palawan is a magnificent dive destination (Tubbataha Reef is 181 km southeast of Puerto Princesa), but since I’m not a diver I rely on snorkeling to see the world underwater. It was in El Nido where I saw the most vibrant corals–including many soft corals that swayed along with the current, like branches of trees being blown by the wind. If you’ve always had fantasies of flying (I know I have), snorkeling over such a rich reef feels like you’re flying over a beautifully, bizarre forest in shades of red, orange, green, blue, and yellow. I had never fully understood how a place could make you weep because of its sheer scale, beauty, uniqueness or all of the above until I saw those fantastic corals. (Unfortunately, I can’t remember how to get back there, since we relied on the boatman and dive master of the resort.) 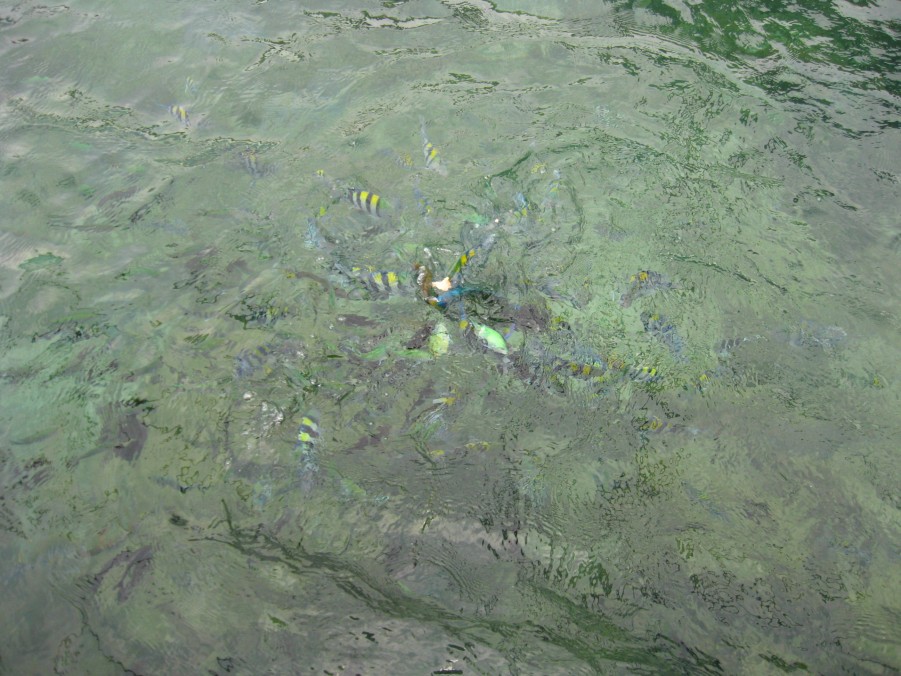 No underwater camera to capture the corals in El Nido 😦 But here is an eager school of fish before I jumped in for a round of snorkeling in Coron.

4) Good eats! Seafood and more seafood. Almost everywhere you go in Palawan, you can feast on some satisfying and delicious fare. In Puerto Princesa, make reservations to Kalui (a must, since it gets quickly full; phone: 48-4332580). Housed in a traditional wooden establishment, it only serves seafood (usually depends on the catch of the day) and vegetable dishes. If you can’t get a table, Badjao Seafront Restaurant, Bilao at Palayok and Kinabuch’s Bar and Grill are also popular dining destinations for some typical Pinoy fare. (There are also a number of Vietnamese restos just outside the capital, as Palawan used to house thousands of Vietnamese refugees who escaped communist rule back in the 70s, but sadly we were not able to try any one of them.)

In Coron, when we were not eating in Sea Dive where we stayed, we would often just go to the nearby carinderia and order some local (and cheap!) dishes. If you’ve grown tired of local cuisine, you can go to Bistro Coron for some relatively affordable French food. In El Nido, while I only got to eat inside the island resort, I heard that in the town you can get decent pizza, a sunset view, and wi-fi at ArtCafe; healthy menu at The Alternative; and the most popular in town, Habibi Restaurant & Shisha Cafe for some of the best coffee, the freshest seafood and good curry.

5) Exploring the town. When you’re not hopping from one island to the next or gazing at the world underwater, walking around the towns of Puerto Princesa, Coron and El Nido is a great way to see how everday life unfolds in this part of the country. Walk (or take a tricycle) to the church, the marketplace, the basketball court, the port, or the local coffee shops (we liked Itoy’s in Puerto, particularly early in the morning for some coffee and breakfast). I particularly love Puerto Princesa, since you still get the perks and conveniences of a city–albeit in a smaller scale and in a more relaxed atmosphere–while the beach is just a short boat ride away. After my last trip to Palawan last year, I told myself that in 25 or 30 years, Puerto Princesa (or Coron or El Nido) would be a great place to retire in. (To my sister, let me know what you think. We can be neighbors.)

Puerto Princesa: Casa Linda, Trinidad Road, Rizal Ave., Puerto Princesa. It’s around three minutes away from the airport. You can just take a tricycle outside the airport and asked to be dropped off at Casa Linda. (I forgot how much the fare is, but you can always ask the tourist information guide at the airport.) It’s old and you know the place has seen better days (I hope they’ve changed the shower knobs and the loud aircon), but it’s cheap (P900 for an aircon room!), the rooms are spacious, it has a charming garden in the middle, and it’s located at a small quiet street that is a walking distance from the busy main thoroughfare of Rizal Ave., from downtown, and from a lot of great restaurants like Kinabuch’s and Kalui. We were satisfied with the Honda Bay and city tour we booked through them.

Coron: Sea Dive Resort, for reservations you can call (920)9458714. It’s a 45-minute car ride from Busuanga Airport to Coron. Public transfers via air-conditioned van costs P150 per person. Private transfers via Sea Dive can be arranged for P1,500. The accommodations are cheap (we got one of its Standard Aircon Room in the ground floor for P900), clean and basic but comfortable. The resort can also arrange boat rides and wreck dives for its guests. I think it’s the only accommodations in town that is conveniently located on the water. You can immediately hop on the boat